Common Core is 'simply not working'

During a speech at Burlington County College in Pemberton, Christie argued that the Common Core standards are "simply not working."

Instead, the governor aims to create a state-based team to develop "new standards right here in New Jersey, not 200 miles away on the banks of the Potomac River."

The statement comes five years after New Jersey became one of the first states to adopt Common Core, which are national standards that outline skills every child should learn at each grade level. Christie voiced his support for the standards early in his first term.

The proposal has received both praise and criticism from social media users.

Hey @ChrisChristie - why'd you flip-flop on Common Core? Do you care more about setting high standards for edu or bowing to poli. pressure?

With #CommonCore flip-flop, Christie may climb up to a whopping 6% in the polls! Who needs personal integrity with those kinds of numbers?

@GovChristie Thank you for pulling out of CC. Do the same for the PARCC. Public School Kids Education Matters! TIME IS NOW.@SavOurSchoolsNJ

Save Our Schools NJ, a "nonpartisan, grassroots organization of more than 28,000 parents and other concerned residents who support public education," released a statement in response to Christie's proposal. 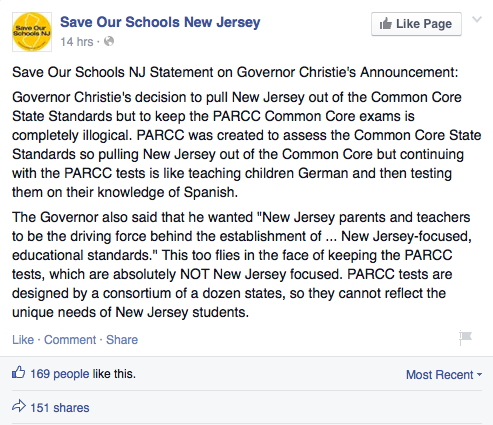