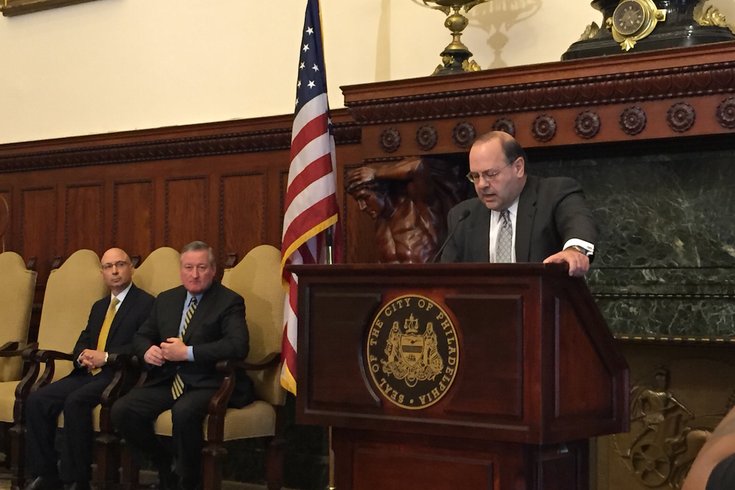 City Councilman Allan Domb speaks at a City Hall press conference on May 25, 2016 about a city feasibility study that hopes to gauge whether it can sell off tax debts to a third party.

Mayor Jim Kenney hosted a City Hall press conference about taxes on Wednesday morning but – shock of shocks! – it wasn’t about the soda, er, sugary-beverages levy.

This one, at which Kenney shared the podium with newbie City Councilman Allan Domb and Revenue Commissioner Frank Breslin, was about city officials exploring “ramped-up tax debt-collection efforts.”

Specifically, they announced the launch of a feasibility study to examine possibly selling delinquent Business Income and Receipts Tax (BIRT) debts to a third party with a specific eye on reducing city pension obligations.

He said the analysis, in its specifics-light early stages, will determine “what exactly is collectable.”

“I had a conversation with Councilman Domb the other day in my office, and said that the collection of this outstanding debt – whatever the number is – goes a long way in helping diffuse the issue of pensions,” Kenney said. “That would be a legacy he could hang his hat on as helping to create a situation which would allow us to ease the debt requirements that we have in our $5.7 billion pension debt.”

When he took the microphone, Domb – a swing vote in the heated soda-tax debate due to come up for a Council yeas and nays by June 16 – noted that “this is all about funding the pension obligations.”

“I realize there may be legal and logistical hurdles to overcome, but those are not reasons to sit on our hands. We must explore every avenue possible to collecting what is already owed.”– City Councilman Allan Domb

Having “campaigned on the promise to help rein in the city’s tax delinquency,” Domb noted that “the sale of business tax debts has really proven to be an effective tool to raising more money for the city.”

“I realize there may be legal and logistical hurdles to overcome, but those are not reasons to sit on our hands. We must explore every avenue possible to collecting what is already owed,” he said. “Better collections have a snowball effect on taxpayers. When the city truly collects what’s owed, the delinquencies will decline.”

Breslin said that the city Law Department is exploring state and local law to determine if there are any restrictions on selling off the debt. After that, they’ll study the operational requirements and costs associated with the plan.

When that’s complete – something for which there’s not a concrete timetable – officials will better know the “potential revenue gains” available.

Specific to the BIRT tax, Breslin said there were about 25,000 delinquencies accounting for about $70 million in back taxes. It could expand to other business taxes depending on the outcome of the feasibility study.

“The other issue that’s important here is that this is not residential real-estate [tax],” Kenney said. “We’re living in a very poor city and we’re not looking to [make anyone lose their home]. These are business debts that are owed by commercial operations, not residential ones.”

When PhillyVoice asked whether revenues raised through this upstart proposal could conceivably be used to fund his soda tax-financed initiatives, Kenney said no.

“From my perspective, this is not a sugar sweetened-beverage tax discussion,” he said. That tax “would be collectable in July 2016. This is going to be a longer process, and wouldn’t be available for paying for pre-K, community schools, parks and recreation centers.

“The hope is that we get our act together and figure out a way to get this done that, come next year or the year after, that money would be available for other things that the city needs to pay for, but Harrisburg may not be paying for.”

He cited looming Philadelphia School District budgetary requests – and uncertainty about how much funding will be provided by the state legislature – along with the pension-fund “albatross” that also require the city’s fiscal attention.

Stripping through the CPA talk, Domb summarized what it all could mean for Philadelphia.

“This is a really clear message to people who owe money to the city,” he said. "It’s time to pay up.”