A closer look at the Philadelphia Union's 15-game winless streak 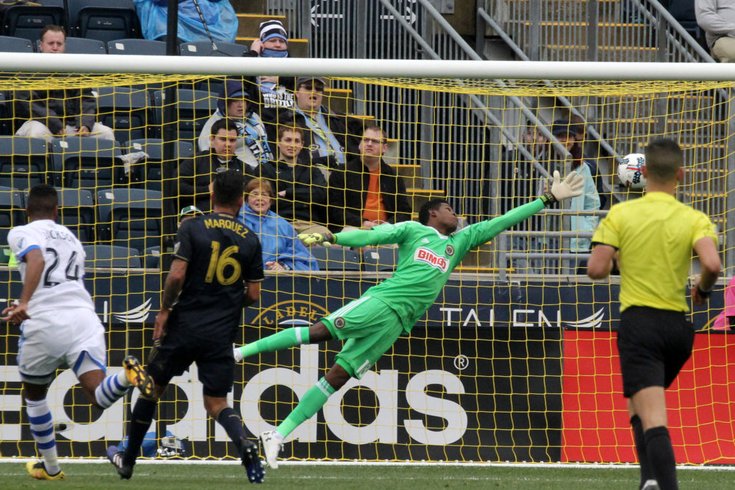 It's now 245 days and counting since the Philadelphia Union last won a game.

That was on August 27th, 2016, when Roland Alberg and Tranquillo Barnetta scored in a 2-0 home shutout against a Kansas City team that finished with nine men on the field.

The winless streak now stands at 15 games, with Jim Curtin's club losing 10 of those and drawing the other five. The streak includes 14 regular season games and a playoff loss in Toronto.

Curtin has disputed the idea of lumping together the 2016 and 2017 seasons, claiming that he's working with two different teams in two different sets of circumstances. He's not wrong, but a lot of the issues, like defensive mistakes and a lack of attacking precision, showed up at both the tail-end of last season and the beginning of this season. There may not be continuity in the roster, but the problems feel like they're the same.

Even if you remove the offseason entirely, you're still looking at a winless streak that spans 114 days. The Union went winless from August 27th to October 26th in 2016 (60 days), then picked it up again on March 5th of this year, adding 54 days to the stretch.

If the Union lose or draw in Los Angeles on Saturday night, they will have gone four straight in-season months (September, October, March, April) without a win.

This is how the schedule played out after the Kansas City win:

*I'd argue that this game doesn't count for much, since the Union were basically in the playoffs as long as New England didn't make up a 12-goal differential. Philly rested a couple of players in a 2-0 home loss to New York as they backed into the postseason. I openly advocated for the Union to sit their starters and focus on the playoff game.

When you look at the numbers, you've got 14 games worth three points each, for a total of 42 points. The Union have earned just five of 42 possible points going back to last August.

A few more stats over the length of the streak:

**All four of Sapong's goals during the winless streak were scored in 2017.

Not saying it will happen but the Union blowing a 3-0 home lead to a one-win team to keep alive the winless streak would be pretty Uniony.

If you're looking for some kind of silver lining or context here, I guess I'd point out that the Union did have some tough games during the stretch.

They played Toronto three times and twice at BMO Field. They played at Red Bull, at Vancouver, and at Portland.

But they also had some games they had no business losing. The 1-1 Montreal draw was an 88th-minute choke job. The three-game home stand against Portland, NYC, and the Impact resulted in just one point from a possible nine. The Union also had no business losing 3-0 in Chicago or putting in the pathetic performance we saw against Orlando last October at Talen.

Plus, if you want to talk about the Union not being favored against "better teams," then who exactly are they supposed to be favored against? Minnesota at home? You can't play the "tough schedule" card when you had winnable games at home to Montreal and Orlando, plus reasonable road trips to D.C. and Red Bull.

The bar needs to be set somewhere.

Streaking in both directions

The current record for longest MLS winless streak is held by the New York/New Jersey Metrostars, who went 0-15-4 in the summer of 1999. This was a team featuring Tab Ramos, Tim Howard, and current Union assistant coach Mike Sorber.

Here's the rest of the chart, courtesy of Climbing the Ladder: 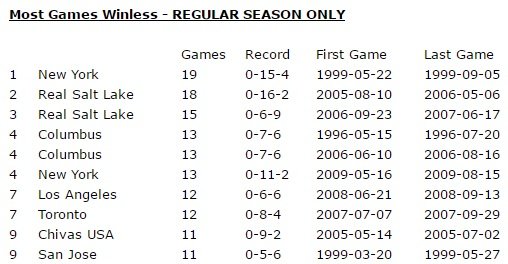 We're only including the regular season here, so if you eliminate the playoff loss in Toronto, Philadelphia would be in sole possession of 4th place with 14 games winless and a 0-10-5 mark. If they lose or draw in Los Angeles on Saturday, they will tie Real Salt Lake for third place on the list.

On the other end, the longest winning streak is 15 straight games, set by the LA Galaxy back in 1998. The parity in modern day MLS makes me think that their streak is going to hold for a long time.

Two teams have gone 19 games unbeaten. Columbus did it in 2005 and FC Dallas did it in 2010. This year's Dallas team is unbeaten in six games to start the season.