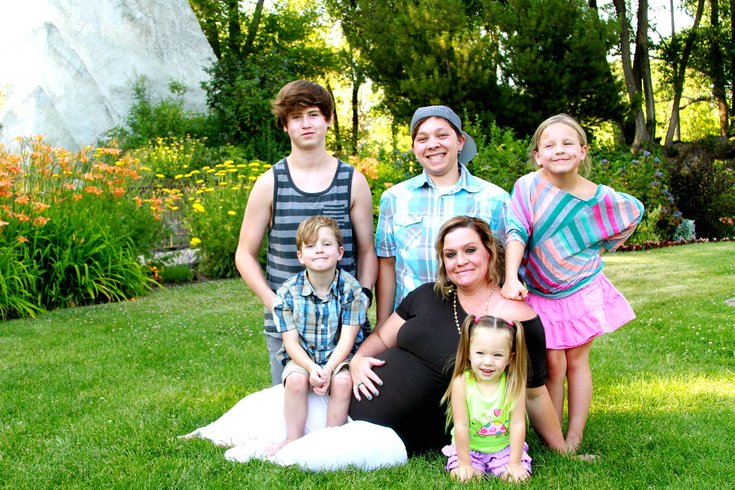 In April 2011, Eliza Spears began dating Kelly Arciaga. The Salt Lake City- based couple traveled to New York to be married that November. “We were married on a beautiful fall morning in Central Park on 11-11-11 at 11:11,” Eliza recalls with a smile. 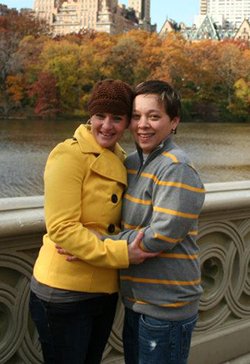 Today, the Arciaga-Spears family includes 4 children: Senicka (14), Aidia (7), Joel (5) and Teegan (3). Eliza is the birth mother for the oldest three, children born from her earlier relationships with men. Kelly is the birth mother of Teegan, the couple’s youngest, conceived via artificial insemination at home. One of Eliza’s brothers is the biological father of Teegan.

While treasuring the genetic link and the loving bond shared with her wife, Eliza found that being the non-gestational mother “brought up a lot of foreign emotions.” As Kelly moved through the pregnancy, Eliza reflected upon ways to deepen her connection to their-soon-to-be born child – a child not coming from her womb. Breastfeeding, via the induction of lactation, provided the “perfect opportunity.”

“I did a lot of research,” Eliza remembers. With regard to inducing lactation, she found plentiful information, particularly geared for adoptive mothers who opt to breastfeed.

Combined with breast stimulation, the use of at-breast supplements, or hormones, women can stimulate their breasts to produce milk. “It is even possible to breastfeed if you have never been pregnant or have reached menopause,” affirms Teglene Ryan, writing for Breastfeeding USA.

While information about inducing lactation was helpful, there was virtually nothing to be found on co-breastfeeding. What is it like to share the experience of breastfeeding the same child? How do the co-breastfeeding parents balance time? What emotions might come up? Will the milk of both lactating partners be equally nutritious?

At first when Kelly heard of co-breastfeeding, images of the centuries-old practice of wet-nursing came to mind. However, after reflecting upon the benefits gained -- including the fact that their baby could be breastfed on demand once she returned to full-time work -- co-breastfeeding “made sense on all levels.”

“We didn't know anyone who had ever co-nursed,” Eliza recalls. At the time, “literally nothing came up” either with regard to co-breastfeeding groups on Facebook or practical information via Google search on how lesbian mothers are best advised to take turns breastfeeding so as to keep each individual woman's supply steady.

"We were on our own," Eliza states. 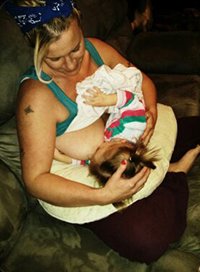 Two months before Teegan was born, Eliza prepared her body to induce lactation. She took herbs like Fenugreek, drank copious amounts of Mother's Milk tea and pumped frequently. Unfortunately, this regime didn't work as hoped. Eliza previously had nursed “plenty” and knew her body was “really, really good” at producing milk. But she needed something stronger to fully induce lactation. Eventually, after careful consideration, she decided to take a prescription drug known for its side effect of galactorrhea – spontaneous or excessive milk production. Eliza relied on this medicine throughout her co-breastfeeding experience.

After Teegan was born, Eliza became the stay-at-home parent as Kelly’s full time employment provided financial security for the family. Their subsequent co-breastfeeding schedule was modeled upon this reality. Kelly breastfed Teegan at night and on her lunch-break – she worked a block away and could come home easily to nurse. Eliza breastfed during the day.

"I will always be grateful," Kelly states with emotion. "There was never a blip of jealousy.” Nonetheless, returning to work was a hard transition. “Going back to work is difficult for any mother, whether you are co-nursing or not. If anything, I felt better knowing Eliza could stay home.”

Co-breastfeeding also carried important social implications. It was important for Eliza to have their older children see her breastfeed Teegan and she experienced a great deal of sadness when various friends and family members didn't regard her as Teegan’s mother. “In general, people would see our expectant child as my wife's baby and I was the other wife," she states. Yet, by breastfeeding Teegan in public settings, Eliza was able to firmly acknowledge that she “was just as much her mother as Kelly.” 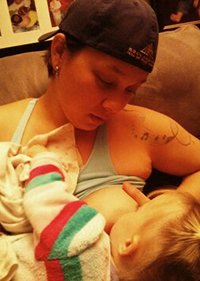 While grateful for the bond that Teegan and Eliza shared, Kelly too recalls heartache. At 9-month, Teegan went through a phase of preferring Eliza's presence “all the time.” It was “really hard” Kelly remembers. At night, she would hold their daughter and say: “I'm your mom, too. I don't see you all day long or put you down for your nap, but I'm your mom, too.”

Because pumping at work “was not an option” states Kelly, the couple remains grateful for the shared breastfeeding experience, allowing them to avoid supplementing Teegan’s diet with formula. In fact, at one point, they had an abundance of breast-milk and made a donation to a mother who did not have enough.

Throughout their journey, Eliza often wondered about the quality of her milk. She often questioned whether or not her milk was as “nutritionally significant” as her wife's milk. Did they both create antibodies specific to their daughter's needs? She wishes their milk could have been tested and studied.

“What I do know is that we have a very healthy girl,” Eliza states.

Teegan breastfed until she was 20-months old. The decision to wean came at a time when Kelly's milk supply dropped and Eliza began a demanding midwifery-training course load.

Weaning was “very sad for both of us” Eliza recalls. Yet, they both feel “very empowered” when reflecting upon the journey. Twenty months was a “huge success.”

What advice does the couple have for future co-breastfeeding mothers?

For both women, the key is honest communication. “I can see how things could have turned into resentment,” states Kelly. She advises co-breastfeeding couples to be fully dedicated to open communication, making this as practical a priority as ensuring that both mothers maintain a healthy diet, drink “lots of water”, and find their own “smart” scheduling/rotation to maximize their supply. 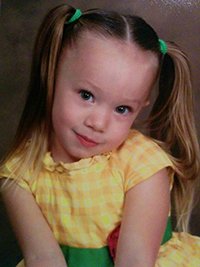 While inducing lactation and/or co-breastfeeding “are very personal decisions,” Eliza advises adoptive mothers and lesbian non-gestational mothers to “at least consider it.” Co-breastfeeding was “one of the most powerful experiences of my life,” she affirms. It was a “complete experience” on an emotional, spiritual, and nutritional level.

Looking back, the couple attests that co-breastfeeding was by far the best choice they could have made not only for Teegan, but also for themselves. The experience strengthened the love shared between the women as mothers.

“I would watch her nurse and it was beautiful,” Kelly lovingly recalls. “Whose womb [Teegan] came out of was irrelevant.”

“In the end, we had a greater respect for one another,” Eliza affirms with tenderness.

Family photo by Timbra Wilst at Creative Cause Photography.