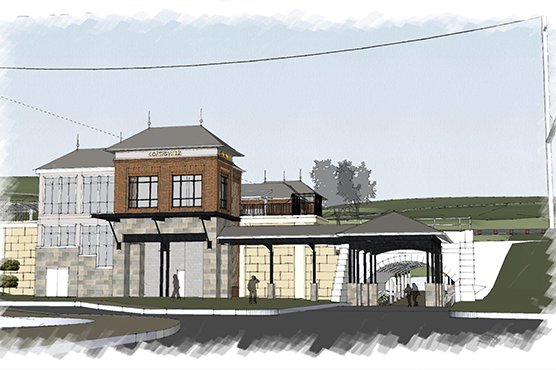 A rendering of the new Coatesville train station, whose construction is expected to begin in late fall of 2021.

A long-awaited project to build a new train station in Coatesville appears to be on track to begin construction this fall, marking an important step forward in efforts to revitalize the Chester County city.

PennDOT officials announced a bid opportunity for the project this week, advising contractors that a pre-bid meeting will be held virtually on July 27 and submissions will be accepted through the agency's Engineering and Construction Management System.

The goal is to start construction on the project late this fall.

The new train station, more than a decade in the making, will be built just east of the historic station house at Third Avenue and Fleetwood Street. The station house has been closed for more than 25 years and does not meet ADA accessibility requirements. Passengers who currently use the Coatesville station access the platforms from outdoor stairs.

The existing Coatesville station is among the region's least-used by Amtrak, which owns the tracks along SEPTA's Paoli/Thorndale Line. SEPTA Regional Rail once served Coatesville but truncated the service, ending in Thorndale.

Amtrak aims to increase train frequency at the new Coatesville station once it's completed in 2025, and SEPTA signaled plans to resume Regional Rail service to the city in the future as well.

"Investments in transit infrastructure are critical to the economic vitality of the region, and we appreciate that PennDOT continues to make upgrading the Keystone Line a priority," said SEPTA General Manager Leslie Richards. "The Coatesville Train Station project will be another important improvement, and today's announcement is a welcome milestone. We look forward to working with PennDOT, Chester County and the city of Coatesville in serving this growing community."

The new station will improve ADA accessibility and provide level boarding platforms, elevators, ramps, site lighting and security, improved drainage and surface parking for local and regional commuters, PennDOT officials said. Station platforms will include canopies and seating. A pedestrian overpass also will facilitate movement between platforms. The project is estimated to cost about $21 million.

The Redevelopment Authority of the city of Coatesville also received $1.65 million to build a 175,000-square-foot multimodal parking facility at Fourth Avenue and Fleetwood Street to accompany the new station. The facility is expected to include bus transportation integration, covered waiting shelters, bike racks and nearly 500 parking spaces to support SEPTA, Amtrak, and Link and Kraft Bus transportation services.

A new layout for Fleetwood Street will maximize space for commercial and retail development on the south side, opposite the new station's location.​

During the project design phase, PennDOT worked with the Coatesville community on streetscape improvements on Third and Fourth avenues in 2019 and 2020 to improve access from downtown to the area of the new station. Parts of the historic station also were revamped in late 2019 by the production company behind the hit HBO series "Mare of Easttown," which included some scenes in Coatesville.

Officials in Coatesville celebrated news that the train station project is finally ready to get underway in the coming months.

"The new train station is a critical piece of the city's 're-imagine Coatesville' focus and collective economic revitalization efforts," said City Manager James Logan. "Coatesville residents, including our youth with transportation challenges, will soon have access to other regional areas, and daily commuters can cut their drive time significantly with a nearby regional station. It has been long journey and PennDOT has worked tirelessly with Amtrak, city officials, members of the Coatesville Redevelopment Authority and Coatesville's construction team to help guide us through this entire process. We appreciate their commitment and partnership."