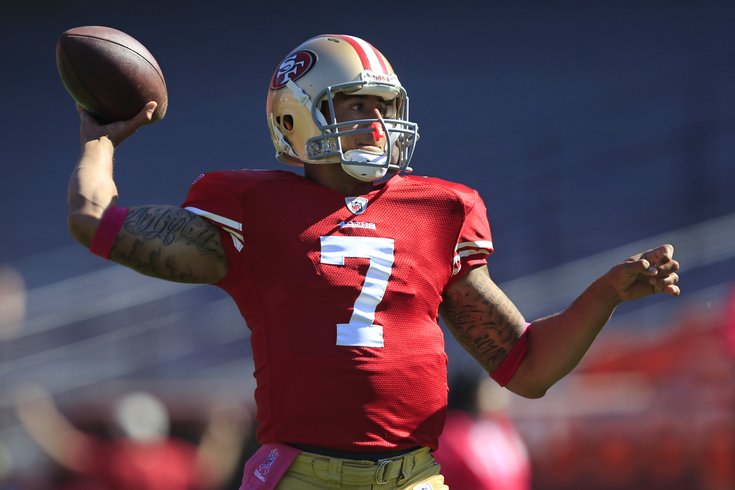 Embattled NFL quarterback Colin Kaepernick was seen Thursday at the campus of the University of Pennsylvania, where he was joined by key players on the legal team surrounding the NFL's ongoing collusion investigation into whether the league worked in concert to keep the former star off the field.

Kaepernick, a lightning rod in the tense political atmosphere of U.S. race relations, was spotted at Penn Law on Thursday, according to The Daily Pennsylvanian.

Colin Kaepernick hasn't played a snap in two years, but he remains one of the NFL's most talked-about figures. And today's visit to @PennLaw shows there's no sign of that stopping. https://t.co/I6msi4LXLG

The 30-year-old quarterback last played for the San Francisco 49ers in 2016, a year marked by the start of national anthem protests targeting police brutality and racial injustice. Kaepernick, who led the charge among NFL players taking a knee during the pre-game ceremony, triggered a bitter controversy that has drawn rebuke from President Donald Trump and compelled the league to intervene with attempts to revise its anthem policy.

League investigators have spent months pouring over transcripts, front office communications a leaked audio recording regarding Kaepernick's efforts to land a deal in free agency. Teams involved in the probe include the Seattle Seahawks and Baltimore Ravens, both of whom brought Kaepernick in for tryouts over the past two years without signing him.

Thursday's hearing in Philadelphia may have been a pivotal moment for Kaepernick's grievance.

Stephen Burbank, a professor at Penn Law, is presiding over the internal collusion case and has been asked by the NFL to make a summary judgment on whether or not the quarterback's case should proceed. In 2012, Burbank oversaw the investigation of the New Orleans Saints' bounty system to target players for injury. He sided with the NFL in that case, resulting in a $500,000 fine to the team and the suspension of head coach Sean Payton.

Under the NFL's collective bargaining agreement, Keapernick's legal team must prove to Burbank that at least two teams actively worked together to harm the activist quarterback, whose talent many feel warrants a backup position or an opportunity to compete for a roster spot in training camp, at a minimum. A key piece of Kaepernick's case appears to be that President Trump's influence swayed NFL owners to steer clear of giving him an opportunity.

The meeting at Penn could be a signal that Burbank's decision is imminent. Kaepernick's legal team, regardless of the outcome, will likely turn its attention to President Trump, who has already been eyed for a subpoena to provide testimony and may become the target of a federal lawsuit.