Colin Mochrie from 'Whose Line?' shatters the fourth wall

The comedian, along with Brad Sherwood, will be at Parx Casino for audience-interactive improv, 'Scared Scriptless' 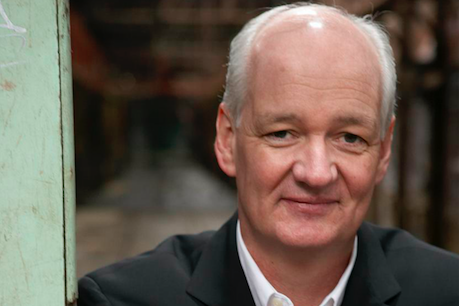 Colin Mochrie has had a career in improvisational comedy that has spanned 40 years.

Whether live and on-stage or on television, the men and women who participate in “Whose Line Is It Anyway?” are tops when it comes to the art of comic improvisation. First executed on Channel 4 in the United Kingdom in 1989, with a U.S. edition hosted by Drew Carrey for ABC (1998–2007), and currently at The CW with Aisha Tyler at the helm, all three versions of “Whose Line Is It Anyway?” have one thing in common: Colin Mochrie, the only performer to have appeared in every episode of the U.S. version of the show.

Currently, Mochrie and fellow “Whose Line Is It Anyway?” comic Brad Sherwood are taking what Mochrie calls "a more intimate and more freeform” version of that audience-interactive improv to the stages of Parx Casino’s Xcite Center tonight with “Scared Scriptless.”

Mochrie mentions that the difference between U.K. and U.S. improvisational comics was the famed fourth wall.

“Brits break through that wall all the time, and will do anything for a laugh,” Mochrie said.

“American improvisational comics are just a little more precious in what they do. They really focus on character development.”

“The abdication of Charles the II was a big topic in England,” Mochrie said with a laugh.

“Needless to say, I knew nothing about Charles. I did Martin Luther King’s ‘I Have a Dream’ speech. In my world, that was right and absolutely true. Only in improv are you always correct.”

You have to be confident in your vision (“even when the scene makes no sense”) to have such a potent level of improvisation ring true, he says.

There is more leeway as each audience – be it “Whose Line Is It Anyway?” or “Scared Scriptless” – are the ones making each scene’s suggestions.

“But if the crowd smells desperation or you lack confidence, the crowd will sense that immediately and pounce on you,” said Mochrie.

Starting in traditional theater, where hard, mindful listening is key, also helped Mochrie through all levels of improvisation.

But if the crowd smells desperation or you lack confidence, the crowd will sense that immediately and pounce on you."

“It’s such a sweet gig,” said the comedian. “So much so, that it has crept into real life as my wife and I apply those principles to our life. There is a lot of saying ‘yes.'

"Along with 'Scared Scriptless' being a smaller, more mobile and intelligent unit than 'Whose Line Is It Anyway?,' what makes the former different than the latter is the length of the scenes. 'Scared Scriptless' allows us to do one scene for 15 to 20 minutes. There is also a limited amount of game-playing with two people, but that focus allows us to be more flexible and use the audience more. We actually bring them up on stage about 80 percent of the time. They’re our third member, always.”

If you go to “Scared Scriptless” expecting it's comedians to hit upon current politics as stand-up comedians do, don’t bother.

“We really try to steer away from politics,” claimed Mochrie.

“I feel as if since the W. Bush era, all politics divides the audience and stops the evening cold. It’s only gotten worse now. You have to keep a good improvisation going and flowing in order for it to be funny, so we’ll have none of that hard hitting political stuff.”

Colin Mochrie and Brad Sherwood will be at Parx Casino's Xcite Center Friday, May 4 for their "Scared Scriptless" tour. Show time is 8 p.m. Click here for ticket information.