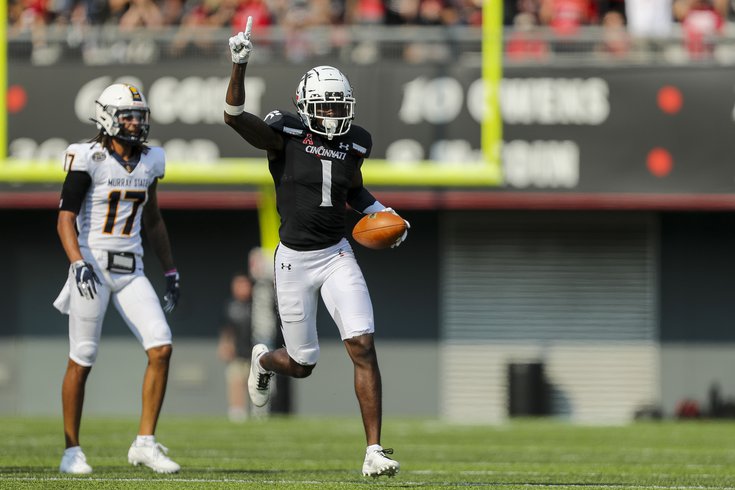 Catalon is a fun player to watch, who has filled up the stat sheet in his short time at Arkansas so far. In 15 career games, he has 135 tackles (9 per game), 5 INTs, 8 pass breakups, and 3 forced fumbles. Many of those 135 tackles were of the violent variety, as shown below.

Catalon should be a high pick (probably Round 2), but some teams will be turned off by his lack of height, at a listed 5'10 (he might even be shorter). The Eagles have shown that they don't care much about height at the safety position, though I guess we'll find out in time if ideal height wasn't a priority for Jim Schwartz, or if it wasn't a priority for the front office.

Gardner is a CB with great length and ball skills who has been one of the best players on a stellar Cincinnati defense since he was a freshman in 2019. In 23 career games, he has 7 INTs (2 pick-sixes) and 15 pass breakups. He is also a willing tackler, which is a nice feature for a team that seems to intend on playing a lot of zone defense. A highlight reel:

The Eagles need to replenish their cornerback depth with young players to replace Darius Slay and Steve Nelson, and Gardner is a scheme versatile player who can man, press, and zone. Potential first-rounder.

Foskey is an athletic edge rusher prospect who leads Notre Dame with 3.5 sacks in 4 games so far this season. He also has a pair of blocked punts in his two-plus year career. Here's a little mini thread of Foskey displaying some versatility:

Foskey is playing off-ball linebacker in this 3-2-6 look. He stays patient enough to let the play develop and then does a solid job reacting to the outside run. Loving this sort of versatility. pic.twitter.com/Lz4E15IkUf

With that off-ball linebacker experience in addition to his pass rusher traits, I wonder if the Eagles might view Foskey as a SAM prospect, but with actual Anthony Barr-like size.

Kinnard is a massive tackle at 345 pounds who has experience at LT and RT (mostly RT). Talent evaluators will have to decide if he is a RT or a RG at the next level. He has good athleticism for his size, but his appeal is that he is a brick wall who opposing defensive linemen cannot run through, and he is a strong run blocker who can move the line of scrimmage. Here he is in Kentucky's bowl game last year.

The Eagles could view Kinnard as a starting guard who can kick out to RT in a pinch. Whether they view him as a RT or an OG, the Eagles have a need either way.

11 - Ali Gaye's 11 pressures against Mississippi State were the most by an LSU player since 2015. (Lewis Neal, 15 pressures, Florida 2015). https://t.co/nBhJ2kPehZ pic.twitter.com/Lfb5cLhsrA

If the Eagles move on from Derek Barnett this offseason, they will be likely to take an edge rusher very early in the draft. Gaye could be an option if they miss on the top-tier guys in the first round.