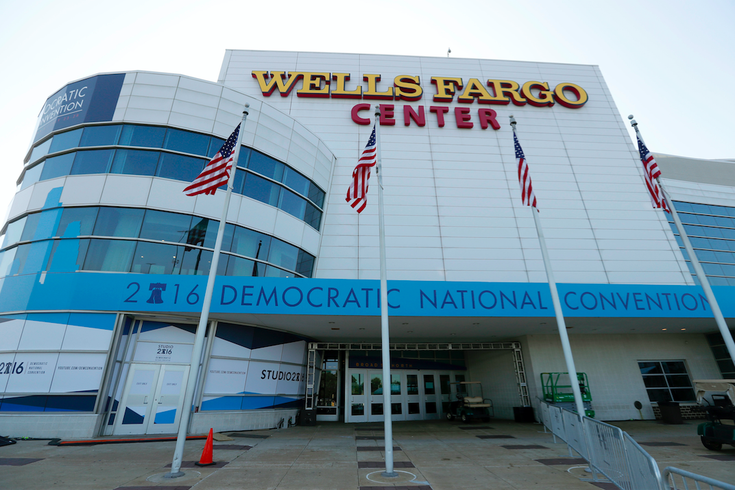 The outside of the Wells Fargo Center is seen before the Democratic National Convention, Saturday, July 23, 2016, in Philadelphia.

Heat, humidity, throngs of protesters and blustery storms can put just about anyone in a crabby mood, especially when it all interferes with work or a commute home.

On the first day of the Democratic National Convention in Philadelphia, some visitors from out of town — and plenty who live here — vented their many frustrations about the city's layout and preparation for a four-day political summit.

It started with a barrage of tweets about the inconvenient location and arena sponsorship at the Wells Fargo Center in South Philly.

i've been in Philadelphia for a total of an hour and I've already realized the Wells Fargo Center isn't near anything else.

Dems are holding their convention at Wells Fargo Center and the agenda tonight is to bash Wall St and big banks. Oh the #LiberalHypocrisy

No city that has its venue miles from the nearest accommodations is prepared for a convention. https://t.co/P8ArMN0NY1

Come on!! Get it together, Philadelphia! It have places to go!! Oh well nap time! #DNCinPHL traffic. pic.twitter.com/a11fuQdzLC

Others jumped in to suggest that Philadelphia shouldn't have been chosen over Columbus and New York City to host the DNC.

It really does not seem like Philadelphia was prepared to hold a political convention. Columbus would have aced it.

Philadelphia, Septa and the DNC: you need to do a better job with this traffic! Holding the citizens of... https://t.co/JIFwFJQ2ha

Stuck in traffic outside of the Wells Fargo, an hour after I left, and thinking how much better Columbus would be at hosting a convention.

Comparing Philly and Cleveland right now in terms of convention logistics is like comparing Cavs and 76ers. No comparison.

Wow. Philadelphia wanted to host the DNC in the worst way and a lot of the reports say it's doing just that. Sigh#DNCinPHL

By and large, most of the gripes had to do with brutal traffic.

Complete clusterfuck getting out of Wells Fargo Arena. 45 minutes and still in the lot. #DemsInPhilly pic.twitter.com/qC9HtNDyuP

So glad the DNC is in Philadelphia,? So happy there are so many traffic jams so many to decide which to include myself in

To the city's credit, officials acknowledged the delays, including a temporary suspension of SEPTA service on the Broad Street Line below Oregon Station, and thanked visitors and residents for their patience.

As Monday ends, we thank our residents & visitors for patience with today’s #PHLRoadClosures. We anticipate similar activity rest of week.

There were also plenty of positive signs on Day One, to be fair. Amid multiple demonstrations, just 54 people were cited and detained.

Some visitors actually took a moment to appreciate the beauty of nature.

A lot of Philly bars-including one inside Le Meridien- staying open til 4am during DNC. pic.twitter.com/P1rnIUf86q

Ultimately, when it comes down to it, how are people going to grumble for four days when they're getting all this free stuff?

Is everyone gonna be all angry again today or did we get that out of our system? #DemsInPhilly pic.twitter.com/TrAkzSInuL