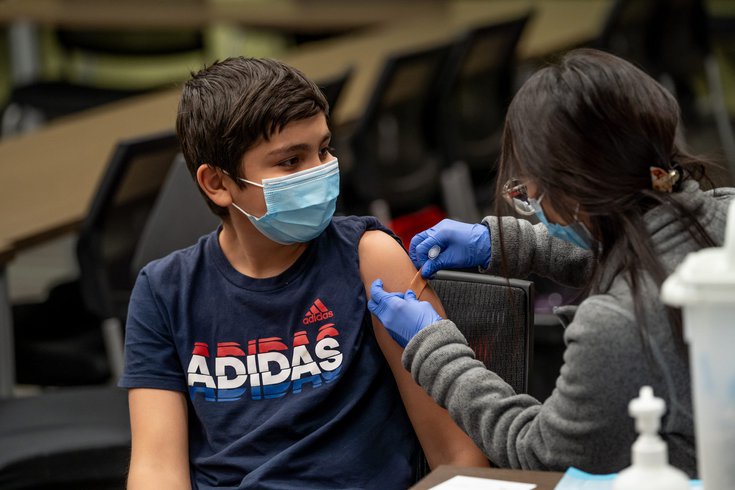 According to a new national poll, 40% of parents with children ages 12-18 say they are unlikely to vaccinate their kids against COVID-19. Above, Toribio Cruz, 13, of Detroit, looks on in relief as medical assistant Stephanie Yang puts a bandage on his arm after administering his first COVID-19 shot.

Many parents say they are unlikely to get their children vaccinated against COVID-19 due to concerns about the shots' safety and efficacy, according to a new national poll.

Pfizer and Moderna each have vaccine trials underway for younger children, and authorization is not expected until sometime this fall. But the latest poll from C.S. Mott Children's Hospital suggests many parents have hesitations.

The poll found 51% of parents with children ages 3-11 say it is unlikely they will have them vaccinated. Additionally, 40% parents of children ages 12-18 – a group that currently is eligible – say likewise.

Seventy percent of parents cited potential side effects as a factor. Another 63% voiced concerns about testing in the child's age group and 62% pointed to efficacy concerns. More than half said their own research was a factor.

"The lack of discussion with pediatricians and other child health providers likely leaves parents at a disadvantage in making an informed decision about COVID vaccination for their child," the researchers wrote.

They added that a child's doctor is a great resource for information about side effects and understanding the regulatory process for vaccine authorization.

"Parents of younger children who have appointments for check-ups or minor illnesses may want to include questions about COVID vaccine in their list of topics for discussion during the visit," the researchers added.

Household income also appears to influence the likelihood that parents will vaccinate their children. Lower-income families were less likely to get children vaccinated, the poll found.

Moderna announced this week that it is expanding the size of its clinical trial in children ages 5 to 11 to better detect potential rare side effects.

According to the New York Times, the U.S. Food and Drug Administration asked Moderna and Pfizer to include at least 3,000 children ages 5-11 in their vaccine trials due to concerns about potential rare side effects, including heart inflammation.

The FDA last month added a warning label to both vaccines after cases of heart inflammation were reported among some younger vaccine recipients.

Pfizer hasn't yet updated its trial design or timeline, a company spokesperson told The Washington Post. The company originally estimated it would have data on children ages 5-11 in September. Its trial was designed to include 4,500 children ranging from 6 months to 12 years old.

The C.S. Mott Children's Hospital National Poll on Children's Health is based on data from a nationally representative sample of 2,019 parents of kids ages 3-18.