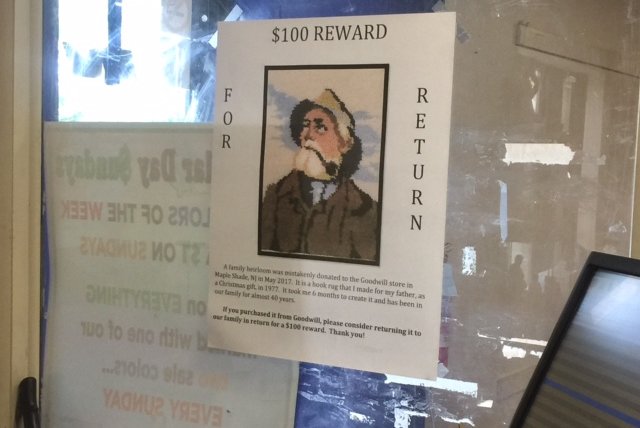 Regina Aitken spent a year making a decorative rug for her father, John Aitken, who loved the book and movie, "The Old Man and the Sea." A relative donated it to a Goodwill Store in Maple Shade without knowing the significance of her family heirloom. She's offering a reward for its return.

Regina Aitken is heartsick – you can hear it in her voice – and she needs your help.

Something she hand-crafted 40 years ago for her late father has gone missing.

Now she’s offering $100 for its return. And lots of gratitude.

“It would mean the world to me,” she told PhillyVoice Monday.

The family heirloom is a decorative hooked rug, but a rug made for framing and hanging on the wall. It depicts a crusty old salt wearing a hat, dressed for heavy weather, a pipe tightly clenched between his teeth.

The figure is meant to picture “The Old Man and the Sea,” a Pulitzer Prize-winning book by Ernest Hemingway, turned into a movie starring Spencer Tracy and then a television mini-series featuring Anthony Quinn.

The rug was her 1977 Christmas gift to her dad, John Aitken.

“He loved them, the book and the movie. He was an avid reader,” recalled Aitken, sounding wistful about the lost treasure that had so pleased him.

"My dad was elated with his gift.  He was proud of me for making him so a beautiful piece of art and he displayed it properly on his wall.  He absolutely loved it.  I was honored."

A small brass plaque identifies the character as “The Old Man and the Sea” on the gray frame she had made for the work.

The piece is probably 16 inches by 20 inches and the wool material and the backing cost her perhaps $30.

When her father died 20 years ago, the wall hanging passed to a relative. More recently, a younger relative living in New Jersey was given the piece.

Unfamiliar with the sentimental value and the months of work it took Aitken to craft the rug, the still-framed piece ended up at a Goodwill Store in Maple Shade in the spring.

And that’s the last anyone can account for the piece.

A Goodwill employee on Sunday said he’s never had anyone inquire about the piece – or the $100 reward – since Aitken placed a reward poster in the store in May.

If you bought the piece from the Goodwill Store, or know someone who did, Aitkens hopes you will return it for the reward.

You can reach her at reggieaitken@gmail.com.

“I would be so grateful. It would mean a great deal to me if I could have it back," she said.

"It would be like getting back a piece of something that my Dad and I shared."