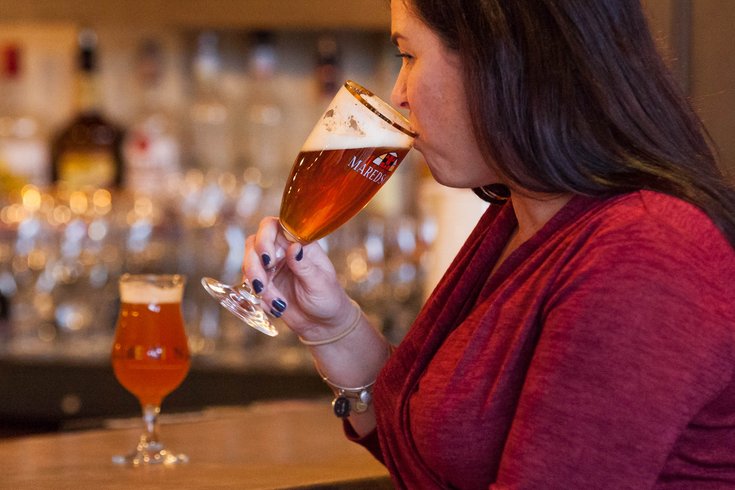 Tara Nurin, Camden resident and beverage writer for Forbes.com, tastes a Maredsous 10 beer at the Keg and Kitchen on Haddon Avenue in Westmont, Camden County.

“Thank you for the excuse to go day drinking,” says Tara Nurin, the newest contributor to Forbes.com, which touts itself as the world’s most widely read business web site.

No, the readers of PhillyVoice – me especially – thank you for drinking with us.

After all, Nurin is Forbes' newly minted beverage writer. The Camden-based journalist is a convenient jaunt away from beer-crazy Philly and its burbs on both sides of the river.

And as Nurin, who lives in the narrow waterfront strip between the bridge and the aquarium close to the Delaware River, is quick to quip: “We have a better view” than Philadelphia.

The beer scene locally is frantic, she says. She does a weekly beer show on cable and despite her insider access, she can barely keep up with all the new microbreweries in the region.

Because of her new writing platform, I’m at “work,” sitting with her in a hip bar and restaurant, Keg & Kitchen, in Westmont, New Jersey, two towns east of Camden.

I’m getting paid to sample drinks I’ve never tasted. Then talk about why they taste the way they do with someone who speaks with easy authority. And finally tell our readers what I’ve learned. 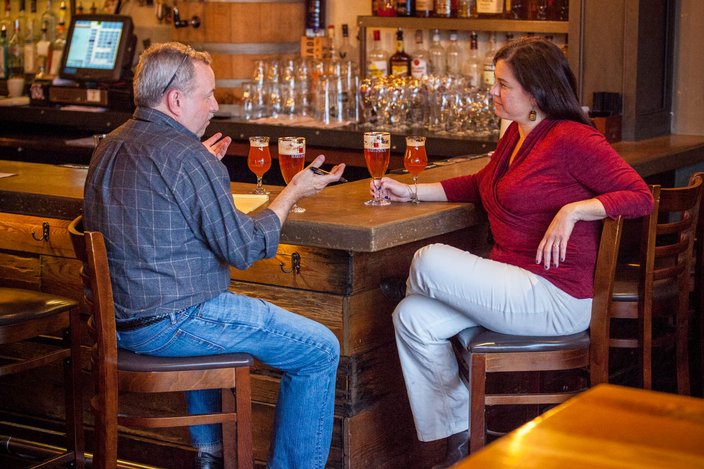 PhillyVoice reporter Kevin Shelly, left, chats with with Tara Nurin, who writes about beer and other beverages for Forbes.com, at the Keg and Kitchen on Haddon Avenue in Westmont, Camden County.

'A LOT OF DRINKING'

Nurin got started in TV journalism, branched into tourism and business writing, and found her niche riding the wave of the craft beer revolution.

The light bulb came on in 2005-2006 just as the craft beer movement matured and washed over the country from California to the East Coast.

“It was the right time, right place,” she says of her career, which she jokes requires “a lot of drinking,” aided by experience, an educated palate and a master's degree from the Medill School of Journalism at Northwestern University.

She’s written for numerous beer publications, USA Today, regional magazines, and many food and beverage online publications. She’s also contributed to books and is hoping the Forbes gig leads to writing her own book.

As befits the slant of Forbes, her contributions are listed as if they were a commodity, labeled under “Food & Agriculture.” Her Forbes work will also freely mix the business of beverages with the pleasure.

Her first column was a numbers and business take on beverages and the Super Bowl.

Despite the Clydesdales commercials, Super Bowl beverage sales actually has tilted more toward wine than beer. That’s because women watch the playoff game in about equal number as do men.

Spirits tie with wine when it comes to the Super Bowl, she tells readers. That’s the thing with hanging with Nurin online or in person: It’s easy to learn something.

She also points out the “symbiotic” relationship between wine and beer pioneers, both with roots in Northern California and both linked to the eat-what-you-grow-and-know culture of the region.

A similar movement is taking hold with distilled spirits today, she says, as “sturdy” brown liquors from smaller distillers are reclaiming shelf space from vodka and "girly drinks."

While her tagline on Forbes reads: “I cover the business of beer and alcohol, mixed with a little politics,” we skipped politics and went straight to the tasting and explaining portion.

It's time for Nurin to imbibe and impart.

First up in my education is Maredsous 10, a Belgian abbey tripel, a style described by All About Beer magazine as an “integration of technology, moxie and charm.”

"It is an amazing beer....It’s miraculous and a perfect IPA.” – Tara Nurin, on craft brew Heady Topper

The monks of Belgium, in this case Maredsous Abbey, have a long history of beer making. And while this abbey's monks have turned over the making to Duvel, a large commercial Belgian brewer with a branch brewery in upstate New York, the first sip of 10 – swirl and aerate, just as with wine, Nurin counsels – is a holy revelation.

I tell her this is a “profound” beer. She smiles and nods.

The beer has a dry, yet slightly sweet flavor, belying its high bitterness rating, as well as a high alcohol content – that’s where the 10 (percent) comes in. The head is creamy, the beer a shimmery light copper color.

Gorgeous and delicious – but hard to find in the Philadelphia area except at some Belgian-styled taverns (Eulogy, Rembrandt's).

The richness and carbonation makes it a good match for duck, a rich creamy cheese, says Nurin, or maybe a dish with a blackberry glaze.

Me? I just want to drink it.

Next up is Spellbound Brewery’s version of a tripel from Mount Holly, New Jersey.

Even with a shot of cherry in the brew, Spellbound’s version is paler, has a thinner head and is “not as lively” as its cousin, Maredsous 10, says Tara. I can tell it is related to the Maredsous, but not a close match.

She suggests turkey and grilled cheese as the perfect food accompaniment. I say maybe caramel and she agrees.

Next, we sample Heady Topper, the ultimate cult craft brew from Vermont. Beer raters often give the double India pale ale – a stronger version of an IPA – the nearly impossible top score of 100 points.

Nurin, not given to gushiness, opens by saying, “It is an amazing beer.”

Then she ups the ante: “It’s miraculous and a perfect IPA.”

For years, Heady was only available on tap at a brewpub in Waterbury, Vermont. Even now that it is being canned, the Alchemist brewery only makes 180 barrels a week, scarcity adding to its cachet.

The distinctive pint can repeatedly screams “DRINK FROM CAN!” Nurin says the idea is that the can traps volatile compounds, making the can taste closer to the original tap-only Heady.

Unlike many IPAs, the hops flavor “is not assaulting,” she says, even though there is a blend of six kinds of hops in the brew. Heady has a "dialed up" dose of malt, smoothing out the hops

The blend gives it dimensions not found in many hop-centric brews. “There is a delightful interplay,” she says. I get it.

She likes Heady enough to usually drink it without food, but she says spicy Thai or Indian food, or a good Vermont cheddar, like Cabot, work well. I try it with Seriously Sharp, Cabot’s flagship cheddar style: It is perfect. 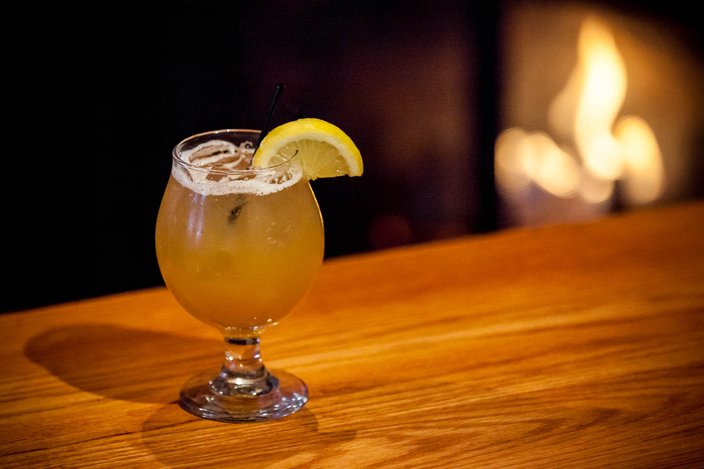 For giggles, we also try a rye whiskey/beer concoction invented at Keg and Kitchen, Whiskey Weisse. For the foreseeable future, Tara is telling Forbes’ readers about spirits as well as beers, but she will eventually concentrate on beer.

Rye, once the staple of American and Canadian whiskey making, but then seen as stodgy and gone out of fashion, has made a roaring comeback in the past few years, she says.

It has more pepperiness and spice than say corn-based bourbons, she adds, which may explain why it is my preference

Whiskey Weisse is made from Jim Beam rye, a hop-based simple syrup, fresh lemon juice and topped off with Hefeweissbier, which has a flavor of banana and cloves, but here serves much like a seltzer for a bit of spritz on the finish.

She says she can see it as a year round drink, but the bubbly citrus flavor strikes me as screaming summer.

Her next Forbes contribution is on Valentine's Day libations. It should be online soon here.