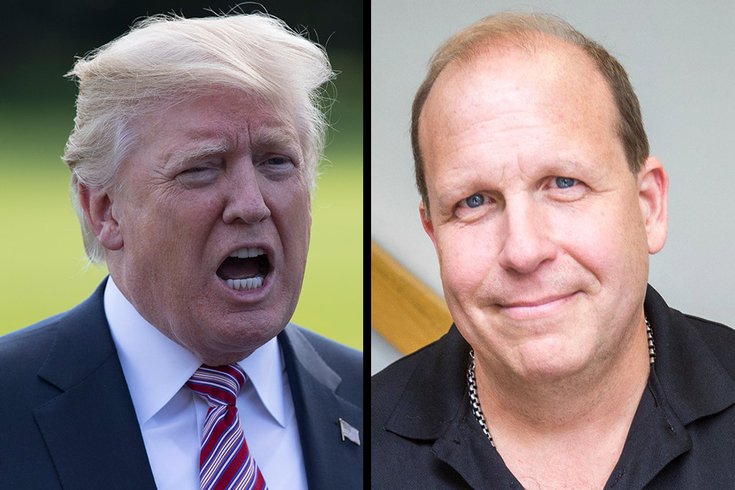 Daylin Leach, who represents parts of Delaware and Montgomery counties, took to Twitter late Monday morning to respond with customary biting sarcasm to an earlier Tweet – preceded by a series of posts over the weekend – by the president.

RELATED READ: Q&A with Daylin Leach: the danger of Trump and those vicious tweets

The senator, who may or may not own a copy of The Oxford Dictionary of Zoology, returned to the animal world for inspiration to craft his presidential takedown.

As the House Intelligence Committee has concluded, there was no collusion between Russia and the Trump Campaign. As many are now finding out, however, there was tremendous leaking, lying and corruption at the highest levels of the FBI, Justice & State. #DrainTheSwamp

The Fake News is beside themselves that McCabe was caught, called out and fired. How many hundreds of thousands of dollars was given to wife’s campaign by Crooked H friend, Terry M, who was also under investigation? How many lies? How many leaks? Comey knew it all, and much more!

The Mueller probe should never have been started in that there was no collusion and there was no crime. It was based on fraudulent activities and a Fake Dossier paid for by Crooked Hillary and the DNC, and improperly used in FISA COURT for surveillance of my campaign. WITCH HUNT!

On Sunday the presidential storm continued, with a refocus on McCabe and Mueller.

Spent very little time with Andrew McCabe, but he never took notes when he was with me. I don’t believe he made memos except to help his own agenda, probably at a later date. Same with lying James Comey. Can we call them Fake Memos?

Spent very little time with Andrew McCabe, but he never took notes when he was with me. I don’t believe he made memos except to help his own agenda, probably at a later date. Same with lying James Comey. Can we call them Fake Memos?

Why does the Mueller team have 13 hardened Democrats, some big Crooked Hillary supporters, and Zero Republicans? Another Dem recently added...does anyone think this is fair? And yet, there is NO COLLUSION!

Then, early Monday morning, a pithy summary of his charges.

A total WITCH HUNT with massive conflicts of interest!

Leach had heard enough, and weighed in to offer the president a real example of "conflict of interest."

The only "conflict of interest" here is between this bloviating odoriferous toad-woppet and the survival of democracy. @realDonaldTrump https://t.co/OOwhVGmM7p

For the etymology buffs out there, using "toad-woppet" would appear to be Leach's way of doubling down on his Trump snub.

Toad, of course, is a mainstream insult to denote somebody who is stupid, foolish, rude or otherwise undesirable (according to the Urban Dictionary.)

A woppet, if Google is to be trusted, is a Victorian English word with Melbourne roots to describe an idiot or fool.

Leach has minted a number of memorable insults to heap scorn and shame on the president and administration-folk.

You sir, are an amoral coward. You have the conscience of a skunk and the compassion of a hyena. Someday, parents whose kids turn to cannibalism will say "At least he's not Donald Trump". https://t.co/35jkgVkzCa

I'd say "could anything be more evil?" But I know our soulless tangelo-haired, hate-geyser prez will keep trying https://t.co/TQZTZ8Fe1J

Does an insane, lying, treasonous, sunflower-colored manchild Prez get you down? This will put life in perspective. https://t.co/M7xQDEujCt

I need a good April Fools tweet. So here goes: I love you Donald Trump! Be my odious little butterscotch-colored love cookie. #aprilfoolsday

And, of course, the granddaddy of them all:

Hey @realDonaldTrump I oppose civil asset forfeiture too! Why don't you try to destroy my career you fascist, loofa-faced, shit-gibbon!