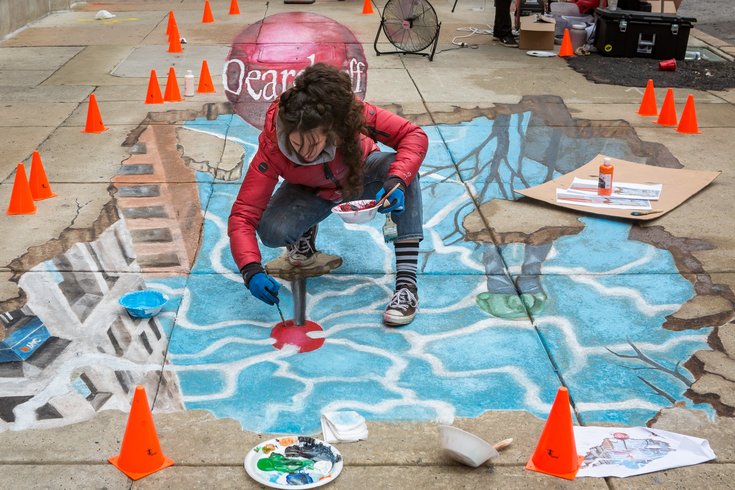 So, she decided to bust out 75 colors of sidewalk chalk and a collection of paint.

On Wednesday, artists began drawing an anamorphic illusion on the sidewalk at Fourth and Market streets, where the branding agency – named Deardorff – opened its new offices. It previously had been located in Delaware.

The idea for the installation – which will last as long as the rain holds off – came from a trip to The Netherlands, where Deardorff observed street art made by Bansky.

She thought commissioning street art outside her office would give people a unique experience – to see an installation unfold.

"You don't normally see it being made – the thought and the expertise and the care and that talent that goes into it being made," Deardorff said. "I hope that people walk away with how important art is to the community and what you can learn from that."

The installation, dubbed "Connectivity," depicts an under-the-sidewalk illusion that makes passersby feel as if they are seeing a hole in the sidewalk, with the surrounding buildings reflected in a pool of water. In the middle, a Google Maps-like pushpin symbolizes Deardorff's new location.

The illusion is particularly striking when captured through a camera.

The artists began drawing the installation early Wednesday morning, arriving pre-dawn to outline the drawing across 250 square feet. The artists filled in the outline with chalk and paint as curious people gathering around them.

"Everybody, even as we're drawing it, they're taking selfies," Deardorff said. "There have been school children walking by. Groups of them have stopped. We're explaining how we did it and the technique of what we're doing." 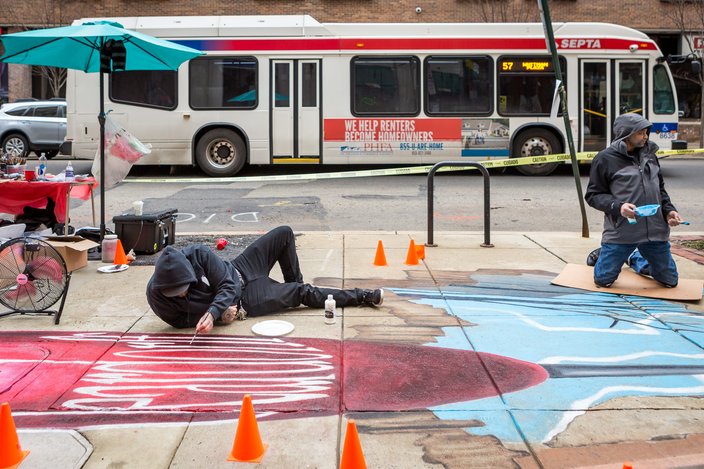 Celestine Johnson, 54, of Northeast Philly, passed the installation as she was walking to work around 4:15 p.m.

She first viewed a rendering of the installation attached to a clipboard. Then she walked over to the actual installation, which was about 70 percent complete.

"That is gorgeous," Johnson said. "I was looking at the clipboard and saying 'It's not going to look like that.' But it does. It's 3D and I love 3D."

Johnson was equally impressed to see the small crowd that had gathered around the installation, as well the artists actively completing the work.

"Everybody is out here supporting the artists that are doing it and taking turns painting," Johnson said. "I'm happy I was here to see it."

They began by projecting a rendering onto the sidewalk and tracing it with chalk. From there, they battled brief periods of light rain as they layered it with chalk and paints. By late afternoon, the illusion was mostly complete.

"It's exciting and fascinating to see from all angles," Mackenzie said. 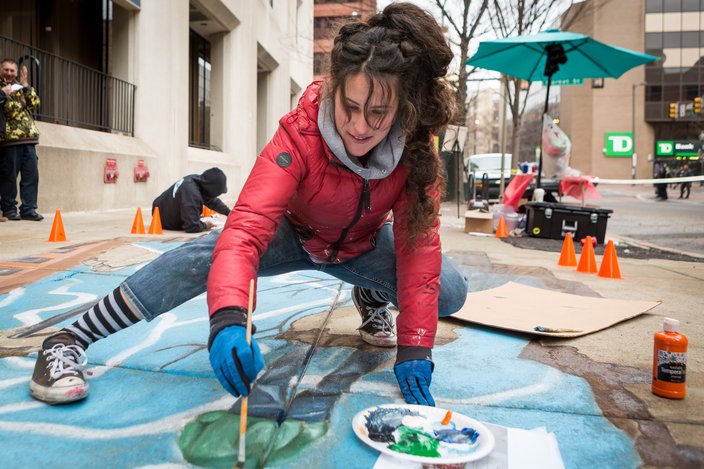 Deardorff, who chairs the both Philly Ad Club's Board of Governors and its charitable foundation, wanted the installation to have an altruistic purpose, allowing the community to experience something new.

"Every agency says they have unique looks," Deardorff said. "As a brand agency, we truly do have different looks and different thinking for each and every client. We knew when we moved, we wanted to do something that was us."

Deardorff hopes the street art isn't the only mark her company leaves on Philadelphia.

The branding agency has created various brands for banks and investment firms, including BNY Mellon, PNC Bank and J.P. Morgan Asset Management, among others. It also has worked with the University of Pennsylvania, PATCO and the Delaware River Port Authority.

Deardorff draws clients from all over the Northeast region.

In looking for a new office location, Deardorff said she wanted to find a more contemporary space for her branding agency, noting its former, two-floor office had grown outdated. Plus, moving to Philly puts the company closer to photographers, illustrators and developers.

"It's a big community and I've always tapped into it," Deardroff said. "Now, I'm just more in the heart of it. It's natural."