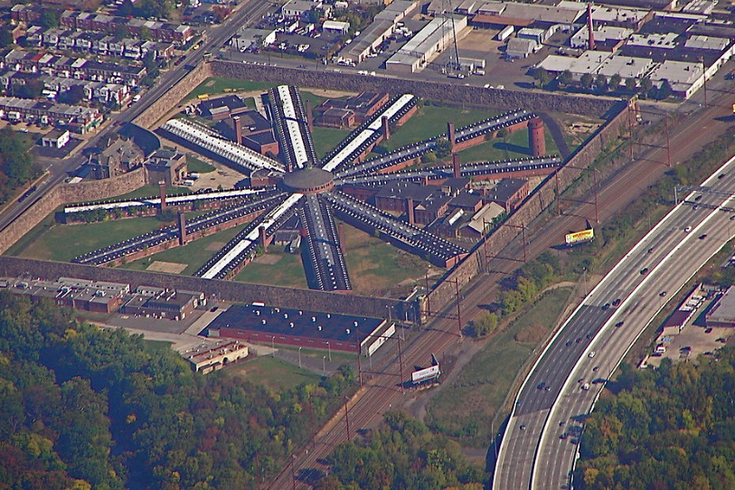 Holmesburg Prison seen from the air in Philadelphia, Pennsylvania in October 2007.

A former Philadelphia prison notoriously known for decades of weapons research projects tested on inmates is currently serving as a film location for the upcoming horror movie 'Death House,' which imagines the scenario of a chaotic prison break.

Billed as the "Expendables of Horror," the Harrison Smith-directed film is reportedly wrapping up principal photography at the Holmesburg Prison at 8215 Torresdale Avenue. The project is expected to be released in October, according to Dread Central.

Written by the late Gunnar Hanson of "The Texas Chainsaw Massacre," the story follows a pair of federal agents who are called upon to quell an uprising at a secret government facility known as Death House.

In an interview with Newsworks, Smith, a resident of Lancaster, explained why Holmesburg Prison was picked for 'Death House.'

“It has a really unique look,” Smith said. “People recognize other prisons from haunted attractions. But this one, they don’t know.”

According to Metro Philly, six Philadelphia prison guards were selected as extras for the film, taking orders from the prison's commander.

These guards have to protect #DeathHouse. They're in for a long day! #Filmmaking #Horror pic.twitter.com/F3Vc8wM8kD

“They wanted guards as extras, and I realized I had just gotten the list of who had perfect attendance in 2015, so I knew who to pick,” Philadelphia Prisons System spokeswoman Shawn Hawes told Metro Philly.

Check out photography from the shoots at Holmesburg prison over at Dread Central.