The two schools have a history of collaboration, including a program allowing students to earn college credit while in high school 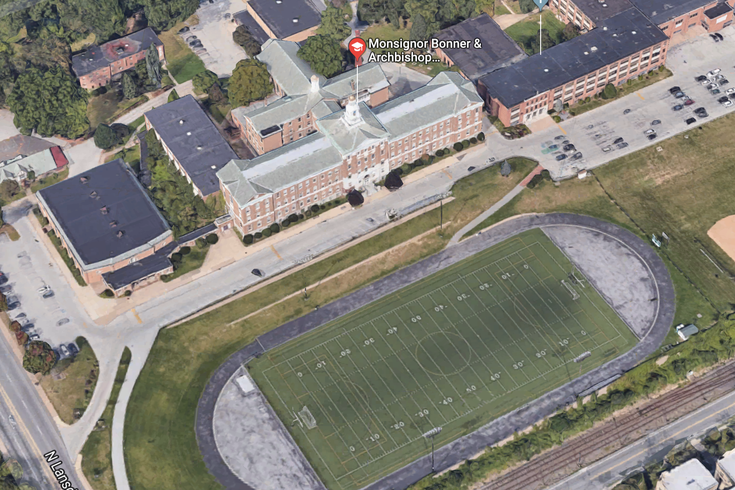 The land where the Archbishop Prendergast building stands was acquired by the Archdiocese of Philadelphia in 1917. The building was constructed shortly thereafter, initially opening as an orphanage in 1920.

Delaware County Community College reached an agreement with the Archdiocese of Philadelphia on Friday to purchase the former Archbishop Prendergast High School building.

The building, which has sat unused since 2012 after Bonner and Prendie combined the respective boys and girls campuses into the newer Monsignor Bonner building, will be used for a new "mini-campus" on the 30-acre site.

The agreement preserves the historic building's facade, according to a release from Bonner and Prendie. The land was acquired by the Archdiocese in 1917, and the building was constructed shortly thereafter, initially opening as an orphanage in 1920.

The high school also retains the turf athletic fields in front of the Prendergast building in the agreement.

"We believe we have reached agreement with the best buyer," Bonner and Prendie President John E. Cooke said in a release Friday, "as we were able to save the exterior of the historic Prendie building and, together with us next door, continue an academic use across the entire site. DCCC’s intent is to consolidate a number of its smaller locations into a state-of-the-art mini-campus right next to us."

DCCC President L. Joy Gates Black called the agreement a "great opportunity" for the college, which already partners with Bonner and Prendie for the college's Dual Enrollment program, in which high school students can earn college credits.

The move didn't come without some minor pushback among the 12 sponsoring school districts in Delaware County that provide financial support for DCCC. The school boards of Upper Darby and Interboro had voted against a resolution, in May, that would've allowed DCCC to purchase the building, and invest $55 million into the building.

Ultimately, the move was deemed the best fit for the building.

“The acquisition by DCCC was the only proposal I endorsed because of its educational focus and the college’s commitment to preserve the historic building," Upper Darby Township Mayor Tom Micozzie said Friday. “Having access to a college campus here in Upper Darby will help to reduce barriers for township residents who are looking to earn their bachelors or associates degrees."