Delaware County adding jobs at twice the rate of Philadelphia

Most of Philly's suburbs still haven't gotten over the recession in terms of job growth, federal data shows.

But there's one big exception.

As Philly.com reported Monday, research from office broker JLL shows that the only counties in the region with jobs at pre-recession levels are Philadelphia and Delaware.

Not only is Delaware County beating the suburbs, it's even beating Philly. Delaware County is adding jobs twice as quickly as Philadelphia, and they're better-paid jobs as well.

Philadelphia has 1.4 percent more jobs than it did in 2007, as seen on this chart which researcher Lauren Gilchrist shared on Twitter. Delaware County's employment level is twice that, at 2.8 percent more than 2007. 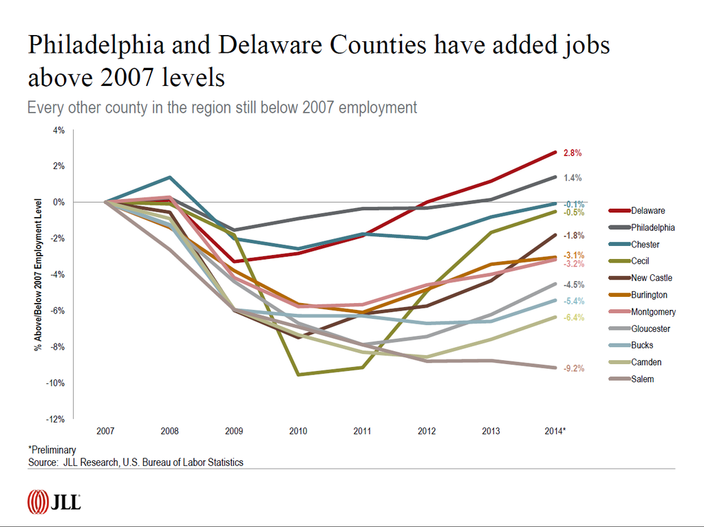 In comparison, the nine other counties in the Philadelphia region still haven't gotten back all the jobs they lost during the recession. Salem County is the hardest-hit, with employment levels still over 9 percent lower than they were in 2007.

Most of the new jobs in Philadelphia are in the healthcare, hotel and restaurant industries. DelCo added 4,200 jobs for accounts, investors and corporate staff.