Here's a look at what you need to know about the newest member of the Philadelphia Eagles, defensive end Derek Barnett, starting with the bio provided by the team: 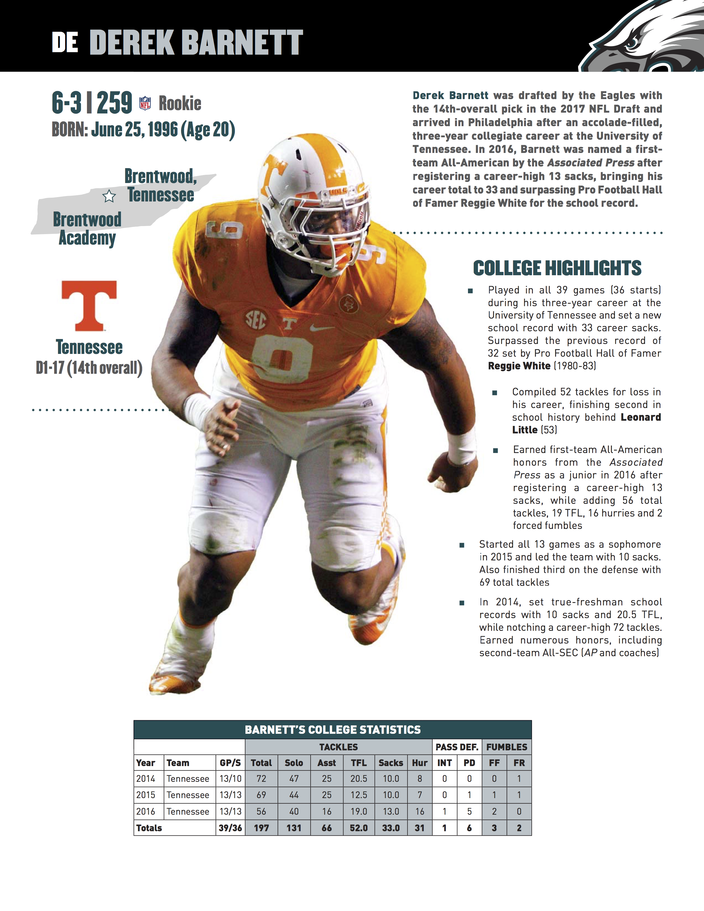 First, a look at how he stacked up at the NFL Scouting Combine:

And since NFL.com's Lance Zierlein was one of the few people to correctly project Barnett to the Eagles, let's go with his take:

STRENGTHS Championship hand fighter on college level. Hands are strong, fast, efficient and lethal. Punch-and-discard winner. As rusher, swats are well-timed discarding tackle's punch attempt. Attacks the edge with good forward lean and works hands and feet in harmony on road to the quarterback. Uses jab steps and lateral movement to search for the edge of the blocker. Has leverage and strength to play right through redirects. Elite production on par with former Vol and Hall of Famer Reggie White against run and as sack artist. Not content to just set the edge -- wants to make the play. Uses hand fighting and play strength to work through leverage points. Long strider who can crash down the line to challenge gap plays if unblocked. Punishing hitter. Delivers crushing tackles and sacks when given the opportunity. Hustle player who pursues the play with intent. Rag-dolls tight ends at point of attack. Plus field awareness recognizing play-action, reverses, and screens. Fluid enough to drop into space and play some zone.

WEAKNESSES Admitted slow starter who has had issues with sluggishness to start a season. Will overthink it at times rather than just reacting. Can be undisciplined with guessing snap count and taking penalties. Change-of-direction issues typical of a broad-waisted big man. Struggles to redirect movements suddenly once momentum starts rolling downhill. Quarterbacks with pocket mobility can elude him. Substantially more twitch in hands than in feet. Feet are average. Initial burst upfield is average. Times snap count to help with his get-off. Aggressive forward charge opens him up to cut blocks. Long stride creates base inconsistencies at point of attack. Length is a concern. Can he still win without decisive, early victories with his hands? Loops to quarterback are rounded and might need a winning, inside counter move as a pro.  [nfl.com]

The NFL.com draft prospect page also had this quote from Mike Mayock:

"I love the energy. I love the toughness. People either loved or they didn't like him because he didn't have explosive measurables in the combine. But his tape is too good and I think the city of Philadelphia is going to love him."

Speaking of the film...