DeSean Jackson open to return to the Eagles in free agency 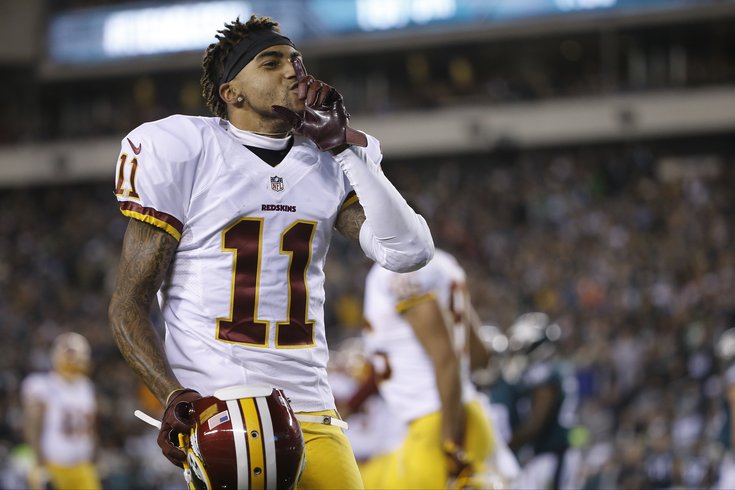 DeSean Jackson doesn't hate you, Philadelphia. He just has a distaste for Chip Kelly.

"I never really had hard feelings toward Philadelphia, besides being released by whoever released me," said Jackson. "That’s different but, I guess he’s not there no more. It’s never really been hard feelings toward the city or to the team, the organization. But like I say, things happen, you move on, and I’m blessed to be playing at a high level."

After the Eagles unceremoniously dumped Jackson in March of 2014 (while getting zilch in return, of course), Jackson signed a three-year, $24 million contract with the Redskins, which will expire at the end of this season. When he enters free agency, Jackson wouldn't rule out a playing once again for the Eagles.

"We still have 11 games here, so being in a contract year, next year I’ll be a free agent, you never know how things will turn out," he said, when asked about returning to Philadelphia. "Whatever God’s calling is, I think I’ll definitely be blessed to be wherever that is. Hopefully, it’ll still be here in Washington and not have to really worry about that, but you never know how this industry, this business will turn out, so you keep your options open and do what you need to do to keep a job in the NFL."

When asked if he still keeps in contact for former teammate LeSean McCoy, Jackson got sentimental, remembering his time in Philly.

"Every day," Jackson said. "He sent me a message this morning to say, ‘Man, we was awesome together.’ I was like ‘Yeah, man. I miss playing with you.’ But you know, gotta live on, move on, and we definitely do. He actually sent me a picture this morning when he scored a touchdown in Philadelphia. We miss them days, but you live on, move on, but it’s unfortunate that things broke up the way they did. I think everybody is still happy and still doing what they need to do."

On paper, Jackson's numbers don't look very impressive so far this season, as he has just 18 receptions for 278 yards, and one touchdown, which would put him on pace for 58-890-4. However, Redskins quarterback Kirk Cousins has missed an open Jackson on several occasions this season, squandering opportunities for big plays.

"I think I’m still playing at a high level," said Jackson, who will turn 30 in December. "I’m still running by guys. I’m still fast, and haven’t lost a step. I still see myself playing another five, hopefully seven years in this game."

"He’s always had the speed," said Gruden. "He still does. If you look at the Cleveland game, he had one catch for five yards, but he (drew) two pass interferences that were 80 yards of offense. We’ve missed a couple big, big, big-time opportunities to get him the ball down the field. His numbers aren’t where he’d like them to be, or where we would like them to be, but he still has that top-end speed that should scare defenses."

This offseason, the Eagles tried unsuccessfully to add a receiver who could take the top off a defense. They signed speedy receivers Chris Givens and T.J. Graham, who both ran a 4.41 40 at the 2012 Combine. After Givens and Graham proved to be bad DeSean knockoffs (to put it kindly) in training camp, the Birds added 2016 undrafted speed receiver Bryce Treggs, who could not make the 49ers' final 53-man roster.

From a football standpoint, Jackson would be a perfect fit for the Eagles' offense, giving rookie quarterback Carson Wentz a deep threat, while also opening things up underneath for players like Jordan Matthews, Zach Ertz, and Darren Sproles.

Jackson seems to be able to put the past behind him. Would the Eagles ever dream about bringing him back?