Despite laryngitis, Illinois delegate voices his concerns about Hillary

Inside Wells Fargo Center, he doctored a sign to make a point about redacted emails and secrecy 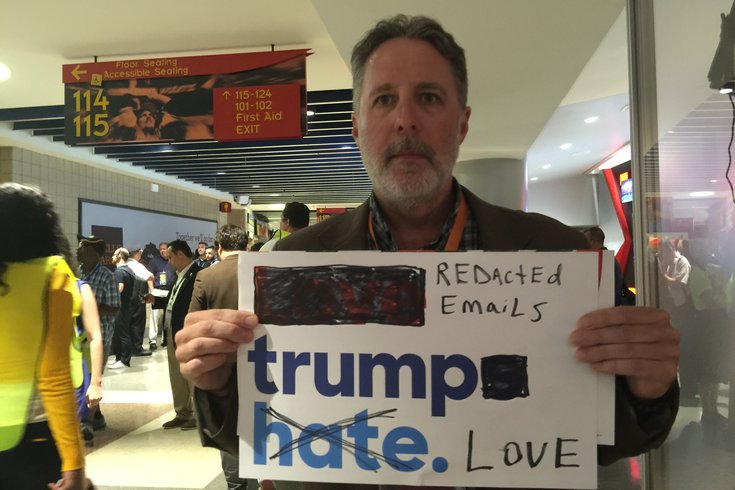 Eric Sterling, a delegate from Illinois, strolled past the Lorenzo & Sons pizza stand at the Wells Fargo Center around 8:30 p.m. Monday, holding a sign that used to read “Love Trumps Hate.”

After holding up a business card that stated “I have laryngitis,” the Freedom of Information Act-filing, redaction-averse anthropologist still took a few minutes to explain the message behind his sign, which now read, "Redacted Emails Trump Love."

“Going through Hillary’s emails as secretary of state, we all know about that, now the DNC as well, in the last week, 19,000. [Debbie] Wasserman Schultz is out on her a--,” he said.

“Bernie people have been screaming about this for eight months, and the press has not been listening and all a sudden, it’s a combination of Russia, Wikileaks and whatever? The Russians are against her because Trump is in with the Russians? C’mon, conspiracy theories. Jesus," he continued. “When you have to hide what you’re doing, it’s a problem.”

As for the reaction he’s been getting inside the Wells Fargo Center, Sterling said it was mixed.

“From the Bernie people, it’s usually pretty positive,” he said. “Obviously, it’s really negative from the Hillary people. They don’t want to hear anything bad about her.”

He also weighed in on Clinton’s running mate, Senator Tim Kaine of Virginia, specifically how it could impact any notion of intraparty unity.