Despite my new shirt, here's why I wasn't on Fox 29 this morning 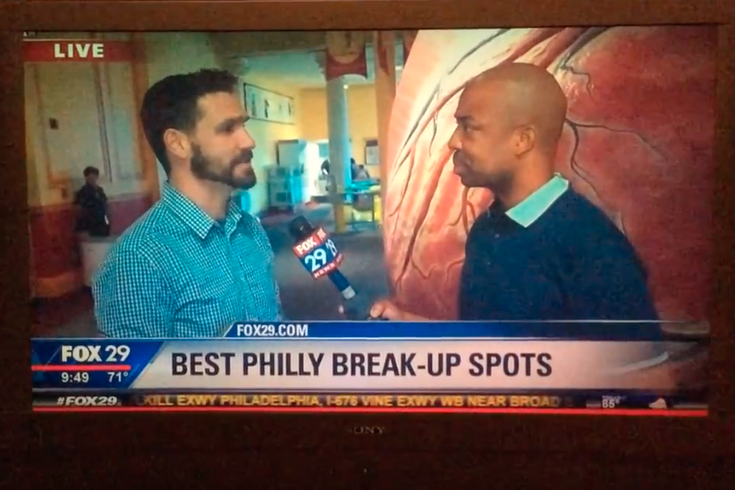 A few weeks ago, the editors at PhillyVoice asked me if I would write a list of places to break up with someone in Philly. I thought it was a great idea, but I am, in no way, a relationship expert, which is why I usually write about candy bars. So, I wrote a very silly list of six great places, which came out last week.

Last Friday, someone at Fox 29 read the article and contacted PhillyVoice to see if I would like to be interviewed on "Good Day Philadelphia this Tuesday." This was even more surprising, so, I, of course, immediately said 'yes.' I have done some videos in the past, but never been on TV before. "Good Day" is a local fixture, plus, I have plenty of free time. I also have a strange fascination with Steve Keeley.

Over the weekend, I bought a new shirt to wear. The shirt was dark grey, long sleeved, with a yellow, dotted pattern. Was there a part of me that thought the shirt was so nice that if I went on TV wearing it that it would go viral? Yes.

Soon I got word that plans had changed and now Fox 29 host Quincy Harris (who also has his own talk show on the network) would visit the places mentioned in the article. I was disappointed, but hey, that’s show biz, I guess. I was still very interested to see what they came up with, so I tuned in this morning to see it in live action.

First, "Good Day" hosts Mike Jerrick and Alex Holley mentioned our article was the inspiration behind the segment, although they did keep referring to it as a “Best Places To Break Up” list – which I made a point to not call it. Then viewers got a chance to see what “pre-married Quincy" was like. He also explained he would be acting out some of the scenes.

The first stop was the parking lot of IKEA in South Philly. Harris, more or less, put into his own words all of the points in the article said, except for one little nugget that he quoted verbatim: “A break up in an IKEA is called a LÖNELY.” It absolutely is not. That’s Fake News and I wrote it! This made me very happy. He then pretended to break up with Dee, a Fox 29 intern, who just wanted to go to the store to buy throw pillows. Harris said that instead, he is throwing her out. She stormed off.

About 25 minutes later, Harris was visiting South Street to break up with Dee, yet again. This time, it was because she was supposedly eying another guy on the street. The hosts back at the studio were amazed at how good Harris was at breaking up with women.

Next, they went to Flotation Philly, another spot listed in our story, and interviewed the owner about the facilities before Dee got dumped a third time. (Poor Dee!) By this point, Fox pretty much stopped citing this was based on our article, though the segment had been running since 8 a.m.

Finally, Harris goes to the Franklin Institute, and this was the one that got me the most. He used my line: “Where better to break a heart than inside of one?” It was right from the article – almost verbatim.

When they got to the Giant Heart, Harris asked Michael from the Franklin Institute, “So, you’re saying the number one place to break up with someone is here?” Michael said 'No,' and, in fact, nobody said that. Michael did also mention our article in his interview, and how people now think that it’s a great place to call it quits with someone, so, I guess those ruined relationships means we did our job?
It would have been cool to be on the show. The second time they mentioned the segment was based on an original PhillyVoice story, Jerrick did say that he likes our website. And a Fox 29 spokesperson said Monday, "We don't want to break up! It's not you. It's us."

The whole thing was almost worth it for the guy who responded, “My wife left me at Chickie and Pete’s.”

Nevertheless, I’m not upset, and would still like to be on the show someday. I will even wear my new shirt.

Editor's Note: Bryan Bierman has been invited to appear as a guest on Fox 29 in the near future.