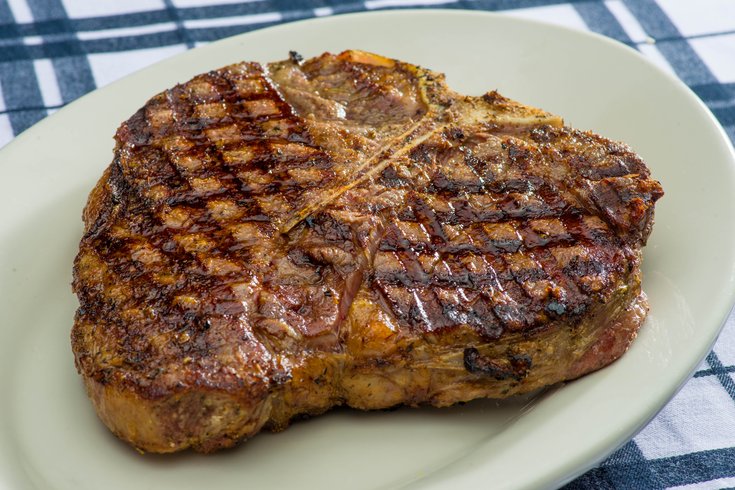 In my usual gig writing Bad For You for PhillyVoice, I exclusively eat junk and fast food – things like tacos where the shell is fried chicken or sour neon unicorn drinks. But every now and then, even the most dedicated junk food critics crave a little bit of the good life. So when Hugo's Frog Bar & Chop House asked if I would eat at their restaurant and write about it, I thought, “Sure, why not?” Compared to my usual routine, this would hopefully be a much-needed vacation.

Looking over the menu at Hugo's before my visit, there was one item that immediately caught my eye: the 48-ounce porterhouse. That’s not one, not two, but three whole pounds of steak. Perhaps it was the audaciousness of the assignment that went to my head, but I became convinced that I could eat the whole thing. I like steak, especially eating it. It couldn’t be that hard, could it?

Then it arrived at my table.

“What in tarnation was I thinking?” I asked myself. I actually said “tarnation”; that’s how shocked I was. I tried not to panic but didn’t do a good job. The porterhouse was the size of a dinner plate spider or a dinner plate. It could easily double as a doorstop or an assault weapon. This would be a task even for full-time professional steaksmen, and it became painfully obvious that I was just an amateur who Googled “How to eat more” the night before. Sure, I eat a lot, but never as a sport. This was the big leagues — the Super Bowl of beef — and I was way over my head. Still, I had gone too far to back out now.

I cut into it and began to eat. It definitely helped that this was the best steak I’ve ever had; it was perfectly seasoned and extremely juicy. I loved every single bite … for the first half-hour. Then, when my body was telling me that my hunger was satisfied, I looked down to see that I had only ingested about one-third of the great beast. This was not good enough. I had to stay the course.

I made sure to never stop chewing and cutting — ”A mouth in motion tends to stay in motion,” a starving Isaac Newton once wrote. I couldn’t let the feelings of fullness drag down my stamina if I ever wanted to finish, although I was beginning to drift into a coma-like state.

In the midst of the nautical-themed pictures on the wall, I felt like Ernest Hemingway’s Old Man — the character, not Hemingway’s dad. Instead of a Cuban fisherman fighting to catch a giant marlin, it was a food blogger struggling to eat a pretty big steak. Instead of a harpoon, a fork. Instead of ravenous mako sharks, I battled with my quickly tightening pants.

Each bite became smaller and took longer and longer to chew. The knife got heavier. My jaw actually hurt. After spending more than an hour trying to conquer the steak, the steak had conquered me. With a third left, I had to call it. Finishing it was definitely doable but not for a mere mortal man like myself.

I felt ashamed. I was disappointed. But above all, I was immobile due to the two pounds of meat I had just hammered into my body. Perhaps I would never be hungry again.

It was at this very moment that the server brought out a slice of chocolate mousse cake that was legitimately one-and-a-half-feet tall. 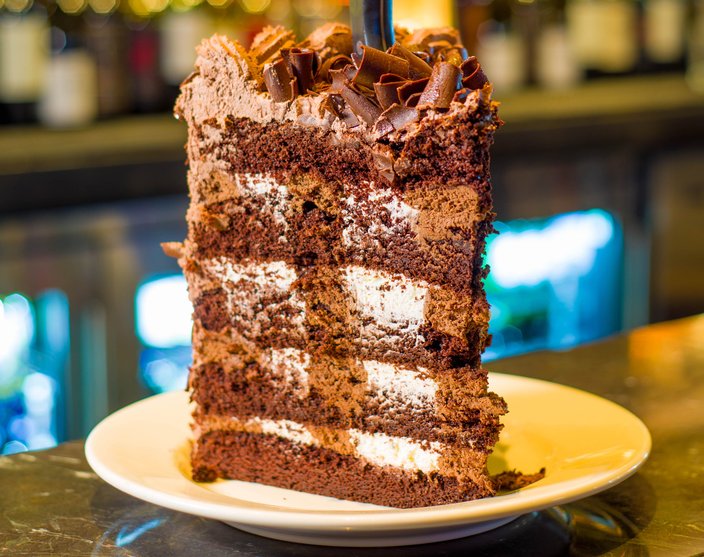 I thought to myself, “OK, six bites.” Despite the food coma that quickly set in, they were totally worth it.


Usually when I’m done writing the Bad For You column, I never want to see or eat the food I reviewed ever again. Not this time. In fact, now that I’ve digested my meal from Hugo’s and am able to successfully walk again, I actually can’t wait to go back and do this again. Next time, though, I’ll bring a few friends.