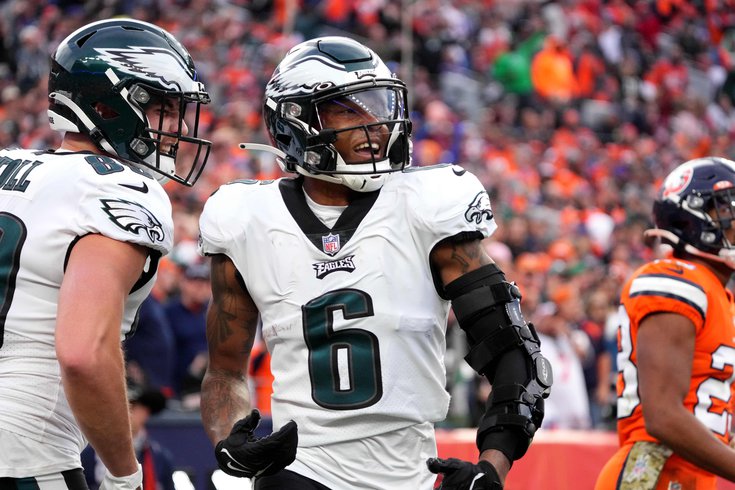 As a rookie, Philadelphia Eagles wide receiver DeVonta Smith has silenced critics who feared he may be too skinny to succeed in the NFL. The Heisman Trophy-winner no longer skips breakfast and said he now sticks to a McDonald's meal before every Eagles home game.

Eagles wide receiver DeVonta Smith has had an impressive rookie season after entering the NFL with high expectations as the recipient of last year's Heisman Trophy.

Through the first half of the 2021 season, Smith leads Eagles pass catchers with 46 receptions, 664 yards and four touchdowns, including a contested end zone catch in Denver that already owns a place in his career highlight reel.

Coming out of the University of Alabama, the only significant question mark about Smith was his slight frame and the concerns it raised about his ability to thrive against the physicality and talent of NFL defensive backs. He has already shown that his elite route running and intelligence give him a leg up, and he's demonstrated his toughness by playing through recent games with a banged up elbow.

Opponents who try to belittle Smith end up looking silly and insecure. Saints cornerback Marshon Lattimore, who has been a thorn in the Eagles' side since the 2018-19 playoffs, tried to show Smith up last Sunday by lifting him up like a rag doll after he made a catch. The broadcast on FOX showed an annoyed expression from Smith, but he kept his composure and returned to the huddle.

Marshon Lattimore was getting put in a blender all day by DeVonta Smith so he tried to flex on him by basically calling Smith skinny here lol so salty he was getting torn up pic.twitter.com/89V3cxB9eo

It would be impossible for Smith to avoid hearing the endless comments about his size, which likely will follow him throughout his career. But Smith also seems to be working on gaining some weight and fueling his body to withstand the rigors of the NFL.

In an interview with GQ this week, Smith revealed that he's developed a ritual of eating McDonald's before every Eagles home game.

"If it’s a home game, for breakfast, I’m going to McDonald’s. I’m not even going to lie to you," Smith said. " I have to get a McGriddle, two hash browns and an orange juice. If it’s a home game, I have to have it. If it’s a road game, I’ll just eat in the hotel. It’ll be some scrambled eggs, fruit, orange juice and that would be it. I really don’t eat a lot before the game. Right before the game, I’ll probably have some fruit and leave it at that."

Smith explained that he's only begun eating breakfast regularly since becoming a pro. During his college years, he would often find himself skipping a morning meal in order to fit classes, lifting, practices and other responsibilities into his schedule. Now that he gets to the NovaCare Complex early every morning, he's made it a point to eat breakfast every day.

The McDonald's pre-game meal Smith picked out adds up to about 930 calories, which is pretty hefty for anyone who's not running routes all day. He happens to be a guy with a fast metabolism and a job that requires a massive expenditure of energy. He also told GQ that he loves to cook and that he tends to have a balanced diet overall.

If McDonald's puts Smith in a good mood on Sunday, all the power to him.

After winning three of their last four games, the Eagles are 5-6 and suddenly in the thick of the NFC wild card race. If they hope to make a postseason run, Smith figures to be an integral part of the team's fortunes in the weeks ahead.