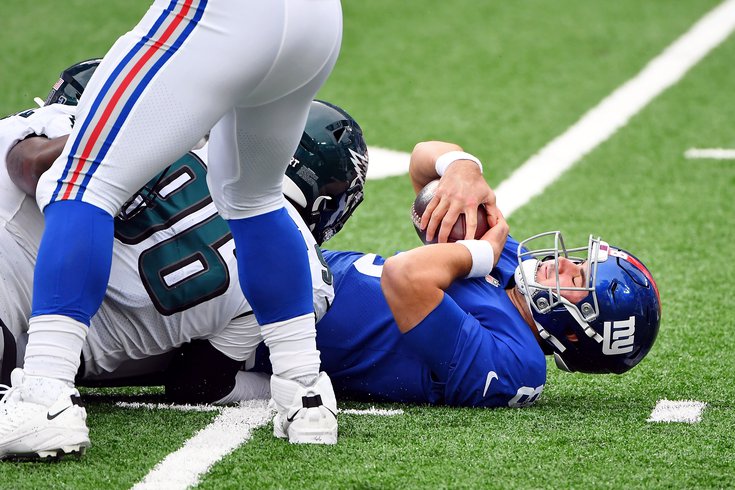 The Eagles must take advantage of one of the league's worst offensive lines.

The Philadelphia Eagles have some momentum and good vibes in their favor coming off a two-game win streak over the Denver Broncos and New Orleans Saints, while their opponent this Sunday, the New York Giants, are reeling after an embarrassing loss on Monday Night Football that preceded the firing of their offensive coordinator.

1) The Eagles' rushing attack vs. the Giants' run defense

However, the Eagles' run game has found its success out of 11 personnel (3 WR, 1 RB, 1 TE) which will force at least one of those big guys off the field.

The Eagles had 30 running plays out of 11 personnel this week, by far the most in the NFL

Spread out the defense and bash them

Saints had no answer

The Giants also lost tackle machine Blake Martinez for the season with a torn ACL. From 2017 to 2020, Martinez has averaged 148.5 tackles per season.

As you can see, they are bottom half of the league in rushing yards allowed per game and per attempt, and they give up a healthy number of rushing first downs, while also not creating fumbles. Interestingly though, they have not allowed many explosive plays in the run game, as their two rushes of 20+ yards allowed is tied for the best in the NFL.

Still, the Eagles can run on any team, as evidenced by their 242-yard explosion against the No. 1 run defense in the NFL a week ago, and they should find success against this Giants run defense as well. The one thing they cannot afford is to have Miles Sanders put the ball on the ground again.

It would also be nice if Boston Scott's Giant-killing heroics could also continue.

2) Dallas Goedert vs. the Giants' linebackers

Speaking of Giant killers, Zach Ertz always seemed to have success against the Giants. In five games since 2017, Ertz had 37 catches for 336 yards and 6 TDs against them, scoring touchdowns in all five of those games. It's probably not a coincidence that Martinez aside, the Giants haven't had good linebackers in a long time.

Goedert would like to take that Giant-killer torch from Ertz, and he'll have an excellent opportunity against guys like Tae Crowder, Reggie Ragland, and the recently acquired Benardrick McKinney. None of those guys should be able to handle Goedert, who has played well as an every down guy since Ertz was traded to Arizona.

Under Jason Garrett, the Giants' offense was bad, boring, and predictable, despite some dynamic playmakers at the skill positions. After a season and a half of awful offensive football, the Giants fired Garrett on Tuesday.

Any tendencies the Eagles picked up on Garrett during their initial prep work this week are now out the window. They'll instead have to prepare for Freddie Kitchens, the Giants' likely "next man up" play caller.

Garrett's firing is bad news for the Eagles. He led perhaps the worst offense in the NFC a season ago:

As a defensive coordinator facing Garrett, you pretty much knew what you were getting, and it was typically bland, uninspiring football. While Kitchens didn't exactly light the world on fire in his stints as the Browns' offensive coordinator in 2018 and their head coach in 2019, the unknown is still scarier than Garrett.

4) Where should the Eagles' D-line go feastin'?

Everywhere. As usual, the Giants' offensive line stinks. It currently looks like this:

Thomas was a disappointment as the No. 4 overall pick as a rookie, but he has played better this season. Otherwise, the Giants have well below average starters at every other spot along their offensive line.

They have replacements playing at LG and C, where LG Shane Lemieux and C Nick Gates were lost with season-ending injuries. They are also particularly vulnerable on the right side, where Hernandez has been a huge disappointment ever since a promising rookie season in 2018, and where Solder's play fell off a cliff three years ago.

In a season in which the Eagles have faced a number of bad offensive lines, this one is arguably the worst of the bunch.

5) The Eagles' secondary vs. the big play

Eh, I'm not so sure. The Giants have their share of weapons capable of big plays in the passing game.

Of course, defending against the deep ball often led to some of the NFL's better quarterbacks absolutely shredding the Eagles' defense in the short and intermediate areas of the field earlier this season.

Still, the Giants don't feel like a team that is capable of that sort of sustained precision, and as one of the charts above shows, they have the worst red zone TD percentage in the NFL, at 44.4 percent.

Their offensive line is a mess, and Daniel Jones is prone to big mistakes. I think that in a game like this against a struggling offense with a new play caller, the first thing the Eagles need to do is take a away the big play, and make the Giants prove they can march the field.