A parade of bad quarterbacks could deliver Eagles a playoff berth 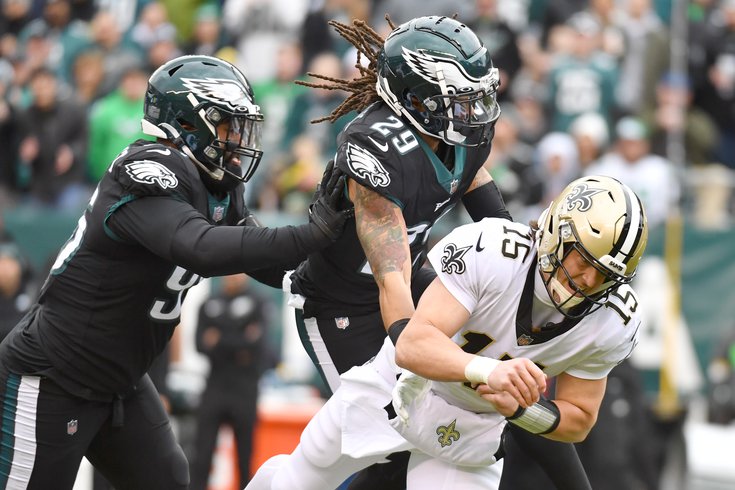 Let's give credit where it is due. Like NL MVP Bryce Harper feasting on bad pitching, or Joel Embiid punishing a team with a terrible big man, the Eagles have found their path to success this season — beating up on bad quarterbacks.

Whether it's thanks to the injury bug or simply to schedule advantages, the football gods seem to have opened up a clear path to a wild card berth for the "retooling" Eagles, who will face just one quarterback who could be considered good (or even halfway decent) over their last six games.

And based on what we've seen through their first 11, Jonathan Gannon's defense is inept against QBs who deserve to start in the NFL, and feasts on those who really do not.

The latest example of this was in their 40-29 victory over New Orleans in Week 11. With Jameis Winston out, a guy who at the very least deserves to be called a quarterback who can start in the NFL, Philly drew Trevor Siemian in their most recent game. And they reminded Saints fans why he is a backup.

Siemian made one great play Sunday, extending a play on third and goal to find Adam Troutman for a first half touchdown. He also scampered for a touchdown run in garbage time. But aside from that he was dreadful, throwing two interceptions, including a pick-six to Darius Slay. His lack of a quick release or ability to regularly run made things easy on the Eagles pass rush, which tortured him all afternoon. And his throwing under duress made things easier for the Birds' secondary. (We aren't even going to acknowledge his two garbage time TDs late in the game.)

The trickle down effects of facing bad quarterbacks is palpable. For the purposes of this article, we'll define a good QB this season as one who is among the leaders in fantasy football points per game this season (through 10 games).

*Some garbage time stats helped this a bunch

This is obviously common sense. The quarterback is the most important person on the field and has, by far, the most influence on a team's success. Of course a team is going to be better against bad ones.

But establishing this trend is important because based on that premise (and on all but one of them being teams under .500) the Eagles have a dream schedule ahead:

All of this comes before a Week 18 matchup against Prescott and the Cowboys again at home, in a game that may be meaningless for Dallas and could very well see Cooper Rush start — if the playoff seeding for them is set.

The Birds sit at 5-6 following their dismantling of the Saints Sunday, and are right in the heart of the race for the 7th and final NFC playoff spot. One would have to surmise there are enough wins to be had over the final six weeks of the season against quarterbacks that scare absolutely no one to get the Birds to nine or even ten wins this season.

With first-round picks coming in from the Colts and Dolphins next spring, and the Eagles emerging as one of the best running teams in football with an exciting quarterback and turnover-hungry defense, fans in this city will be feeling pretty darn good as Philly prepares to drive to MetLife Stadium next week .

However, the Eagles will be all but assured to face one of the NFL's good QBs again should they make the postseason and draw the NFC's No. 2 seed on the road (a team like the Packers, the Cardinals, the Rams, Cowboys or the Bucs). This defense, for all its strengths, against Matthew Stafford or Aaron Rodgers is probably bad news.

Still, one-and-done with a bright future? Eagles fans will likely sign up for that.