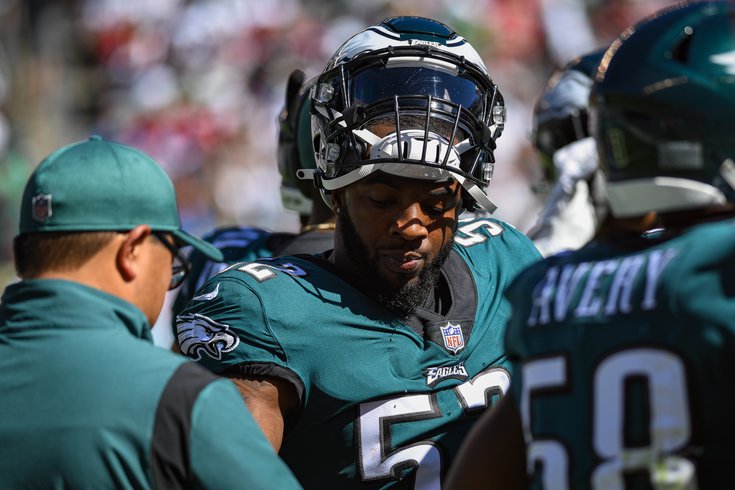 In his Monday press conference, Nick Sirianni said that linebacker Davion Taylor was likely headed to injured reserve with a sprained knee. He added that running back Jordan Howard also has a sprained knee, and will likely miss next Sunday's NFC East rivalry matchup against the New York Giants, but could be back in time to face the New York Jets the following Sunday.

Taylor has started the last six games for the Eagles. He had his best game as a pro in Denver Week 10, when he forced a pair of fumbles against the Broncos, one of which was returned for a touchdown by Darius Slay. Taylor was drafted as a raw prospect out of Colorado during the 2020 NFL Draft, and while he still has a ways to go as a professional linebacker, he has made positive strides during the 2021 season.

To clarify, if Taylor does indeed go on injured reserve, he will be required to miss at least three games, as opposed to three weeks. As noted above, the Eagles play the Giants Week 12, then the Jets Week 13, followed by their bye Week 14. The Eagles then play the Washington Football Team Week 15. Taylor would be eligible to return Week 16 in the Eagles' second matchup against the Giants.

Howard's knee sprain is less severe, but the Eagles will likely miss him in a huge game against the Giants this Sunday. Howard has only played in four games this season, but he has sparked Philly's new run-heavy offense: