Week 12 NFL odds: Point spread and total for every game, including Eagles vs. Giants 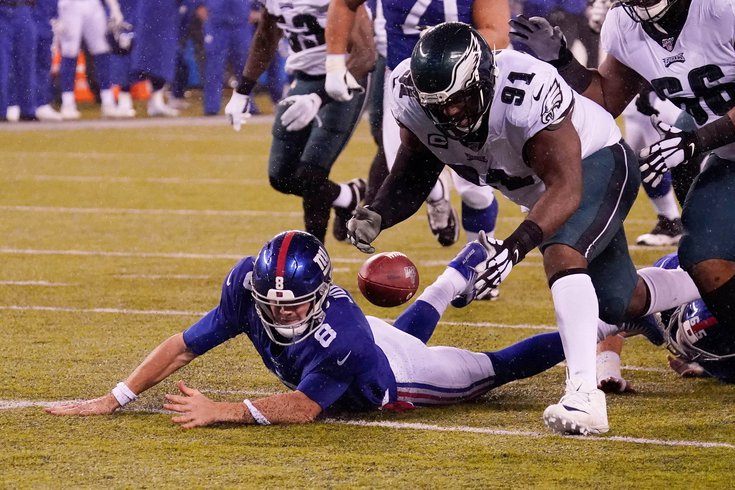 The Eagles will visit the Giants on Sunday.

Is the NFL's weekly slate better when it pits the bottom feeders of the league against some of its best teams, with double-digit spreads? Or when it matches them against each other for some of the season's most lame and unappealing matchups?

After a few weeks filled with upsets from teams like the Texans and Dolphins beating top contenders, Week 12 seems to have separated its games into duels between playoff hopefuls and teams vying for top 10 picks. Which is better is hard to say, but the lines across the board are relatively close ones for the upcoming week of action.

So where does that leave us when it comes to the lines for this slate of Week 12 games? With some intriguing ones, to say the least. As we do every week, let's take a look at the early odds for each matchup this coming weekend, including Eagles vs. Giants...

Why do the Lions play every Thanksgiving Day? Seriously. This game kicks off the Turkey Day slate of games and it'll be a snooze fest, with the most exciting player involved in this one — Justin Fields — unlikely to play due to injuries sustained on Sunday. Watch at your own risk.

This one looks interesting enough on the surface, but the touchdown spread for Dallas could decrease as we get closer to the game. Top receivers Amari Cooper and CeeDee Lamb could both be out for this one. The Cowboys offense will be a lot less dynamic to watch and could make this one a smart play to hit the under.

The Bills are inconsistent, at times looking like a Super Bowl favorite and then losing to middle-of-the-road teams like the Colts (or worse). The Saints too will be licking their wounds after being demolished by the Eagles in Week 11. In the cold of Buffalo on Thursday night the Bills should be in their element and be the ones to bounce back.

The Bengals are looking like contenders and the Steelers are looking like pretenders in the competitive AFC North. As with most division battles, it's best to throw out the lines for these. It should be a close battle.

I guess the Texans are perceived to have a home field advantage, which is why they're favored here. But bleh, let's hope this isn't the regional CBS game on your broadcast slate.

All of a sudden, this is perhaps the marquee matchup of Week 12, with the Buccaneers continuing their Super Bowl defense and the Colts fresh off a dominating win over the Bills. If Indy is able to knock off two real contending teams in back-to-back weeks perhaps they themselves are contenders. We'll see.

The march of crappy teams playing one another continues. The Falcons have an outside shot at a wild card spot and a win here will keep them in the mix.

Cam Newton is back, and will try and end Miami's three-game win streak. Neither of these teams figure to be playoff participants but the Fins can continue to hurt the Eagles by worsening the first-round pick they owe them with another win.

You may not be fully aware, but the Patriots are one of the best teams in the AFC again. On paper this should be a close match and one between two juggernauts in the conference. But the Titans will be without Derrick Henry and possibly A.J. Brown. The Pats 'D' could have another big day.

Philly has won three of its last four and will travel up I-95 to play the Giants for the first time since New York took exception to the Eagles "tanking" last year's regular season finale and gifting Washington a division title. Will the Giants approach this game like it's their Super Bowl? Or will the Eagles, clearly the better team, continue to roll?

Here's a matchup of two division rivals heading in different directions. The Chargers and their high-powered offense appear to have righted the ship, as the Broncos look more and more like pretenders.

This is a game of huge interest for teams with wild card hopes, like the Eagles, as these are two of the teams ahead of them in the NFC playoff picture. Since the Eagles lost to the Niners and San Francisco holds a tiebreaker in the standings, the Vikings winning would be best for Philly. Minnesota and San Fran each have unleashed impressive wins over good teams in recent weeks.

This might be a preview of the NFC Championship Game. The Packers defense is looking more and more like an elite unit while the Rams have struggled at bit of late. Will they falter in this blockbuster matchup in Green Bay, or return to form?

The Ravens won without Lamar Jackson on Sunday but hope he's back when they host their division rivals from Cleveland. The Browns have been battered by injuries and would need a big night from Nick Chubb to have a real chance here.

This one looked a lot more interesting when the schedule first came out this spring. Seattle is almost out of playoff contention as Russell Wilson continues to struggle, and Washington's defense has been far from the top 5 unit they were expected to be preseason.