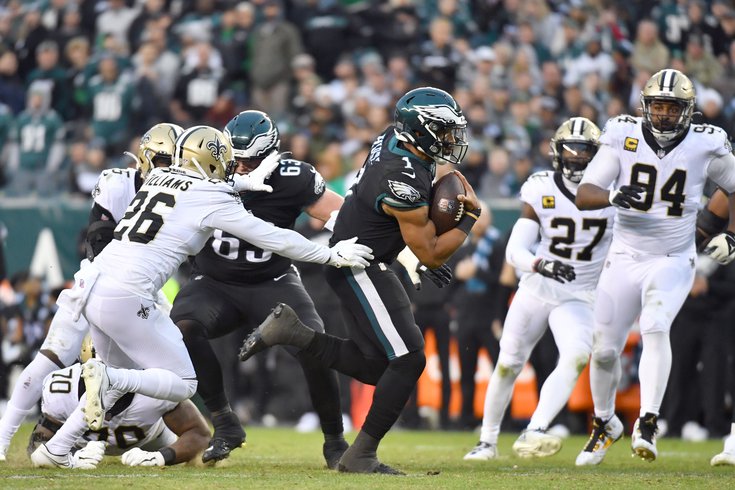 In a crucial Week 11 game that could have future playoff (!) implications, the Philadelphia Eagles bullied the New Orleans Saints in a 40-29 win. As always, win, lose, or tie, we hand out 10 awards.

1) The 'Identity' Award 🏃‍♀️: Jalen Hurts and the Eagles' offense

It's pretty much official now. The Eagles are run-heavy team, which is probably something they should have been all along given that they have a running quarterback, an excellent run-blocking offensive line, and a lot of inexperience at wide receiver.

Heading into this matchup, the Saints had the No. 1 run defense in the NFL:

Not anymore. The Eagles racked up 242 yards on the ground, and Jalen Hurts scored three rushing TDs, the last of which was a highlight reel run that you'll see endlessly this week.

3 rushing TDs on the day! #FlyEaglesFly

Avonte Maddox said, “I was looking for the trainers to get some tape to wrap that kid’s ankles.”

Jordan Howard chipped in 63 yards on 10 carries, but left the game early with a knee injury. Miles Sanders had 94 yards on 16 rushes, but had one costly fumble deep in Eagles territory. He was lucky that another fumble didn't count because the officials ruled that his forward progress had stopped.

Still, the Eagles showed that they can dominate in the run game against any defense, not just teams like the Detroit Lions or the Denver Broncos. They have a clear offensive identity, and while basic, it's also fun.

Slay has three TDs in his last four games. Against the Saints, he anticipated a route perfectly, jumped it, and the rest was easy.

The Eagles were up 33-7 at one point in this game, and while the Saints made a little bit of a run, the outcome was never really in much danger. The Eagles have three wins this season of at least three scores, and while this game fell a little short of that, the Birds put 40 points on the board against a team that hasn't allowed 40 points in a game since 2019.

It's a little crazy to think that this coaching staff thought they had to pass all day to keep games close against teams like the Cowboys and Chiefs. As it turns out, you can have a potent offense even if you run it a lot.

Mailata has taken the torch from Jason Peters as the offensive line enforcer on the offensive side of the ball. On a play in which Marcus Davenport pushed Hurts out of bounds, maybe a little late, Mailata rushed over and and had some words for the Saints' defensive end.

Later, on a run play in which Mailata was trying to finish his block through the whistle, he and Davenport wrestled on the ground, before players from both teams rushed over.

But the highlight of Mailata's day was a one-arm, de-cleating shove to 287-pound Cameron Jordan.

Jordan Mailata likes to serve his pancakes with 1 hand 🥞 pic.twitter.com/4ZDwMsVKrE

Edwards had 10 tackles, an INT that led to an Eagles touchdown, and a fumble recovery. For a guy who is limited athletically, he was everywhere. He was like the Eagles' version of Roy Kent.

Dallas Goedert got paid on Friday, and on Sunday he was Hurts' primary target, hauling in five passes on eight targets for 62 yards. Those may not be eye-popping numbers, but Goedert made some difficult catches, and he ran hard after the catch.

48 yards in the first half
pic.twitter.com/DdeUiOCQbL

That was indeed an insane catch.

As noted above, the Saints at least managed to make the game interesting in the fourth quarter when they whittled a 26-point lead down to an 11-point lead. With the Eagles' offense struggling to find a rhythm, Hurts found Arcega-Whiteside on a pass in the middle of the field on what looked like an RPO.

It was Arcega-Whiteside's first target of the season, much less catch, and it went for 23 yards. The Eagles would finish that drive with Hurts' highlight reel TD run.

Elliott is having a Pro Bowl season.

9) The 'Go Straight to the Airport, Ya Weenies' Award 👋: The Saints

For some weird reason, the Saints have taken excessive pleasure in beating the Eagles under Sean Payton over the years, which has always felt a little odd. For example, he's done laps around Lincoln Financial Field with the Saints team buses before heading to the airport. From Sports Illustrated:

Sean Payton may not have been in full-on gloating mode late Saturday night, but the Saints coach showed a mischievous glint as he stared into the TV cameras following a 26-24 wild-card road triumph over the Eagles. “The drive out will be nice,” he told a throng of reporters at Lincoln Financial Field.

“Nice,” of course, meant his plan to take victory laps on the team bus. “We’re going to take a couple trips around the stadium,” linebacker Junior Galette explained as he packed up his travel bag in the visitors’ locker room. “When he’s that happy, we do that.”

They also celebrated in the locker room after a 2019 playoff win over the Eagles by playing Dreams and Nightmares by Meek Mill:

The Saints are playing Dreams and Nightmares! PETTY 😂😂😂😂 pic.twitter.com/Z3vZ3PiAlP

Oh and Alvin Kamara pathetically proclaimed that the Saints would have "beat the shit out of" the Eagles in the NFC Championship Game if they hadn't choked in the divisional round against the Vikings.

Just get on your buses and head straight to the airport, ya weenies.

The Eagles are a half game out of the 7 seed in the NFC wildcard race, with the easiest remaining schedule in the NFC. They are well-positioned to make the playoffs.