John McMullen: Slow-and-steady Eagles are starting to tick all the playoff boxes 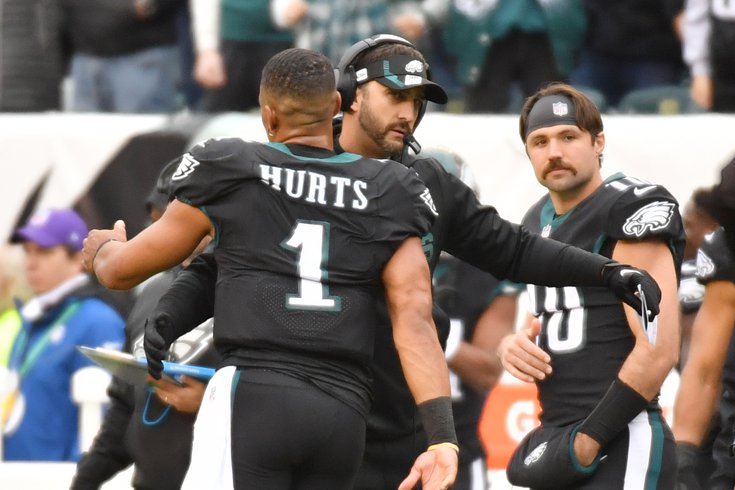 To those on the outside of the NovaCare Complex, Nick Sirianni was playing down the importance of getting his first home win on Sunday at Lincoln Financial Field.

Internally was a much different story.

Moments after an exhilarating win in Denver the Eagles rookie head coach placed a subliminal message in his celebratory post-game speech, planting the seed for Sean Payton and New Orleans.

By the weekend an Eagles win over the Saints was “a mandatory win the city deserves,” according to a team source.

Philadelphia got it in emphatic fashion with a 40-29 win that was hardly as close as the final score indicated, with the kicker being the Eagles turning their season around by running the football, the time-tested city narrative that has dominated sports-talk radio from 1991 all the way to 2021.

Against the Saints, the No. 1 rushing defense in the NFL coming in at 72.9 rushing yards allowed per contest, the final tally was an awe-inspiring 242 on the ground, the third time in four games Sirianni’s offense has broken 200.

Everyone contributed, with Miles Sanders returning after missing three games with an ankle injury pacing the attack with 94 yards, albeit with some ball-security issues, and Jordan Howard punishing the Saints' front with 63 yards before leaving in the third quarter with a knee injury.

Sirianni, though, understands the straw stirring the drink with his running attack and it’s his unique quarterback Jalen Hurts, who added 69 more yards on the ground and three touchdowns Sunday, the first QB to cash in three times on the ground since Russell Wilson in 2012.

“I think Jalen is a special player that forces defenses to play different,” the coach explained. “You look at the tape and again I think I told you guys early in the week, you look at the stat sheet, you look at where they are, you look at their defense, but you also want to do what you do well.

“We know we have been running the ball well and it’s a little different when Jalen is in there.”

In other words, the Eagles took a look at what the New Orleans defense did well and said, “F@#% it.”

Stopping a conventional running attack is apples to oranges when Hurts is in the mix.

“You try to look at some teams that they've played that are similar to that, but you want to make them stop what you do well first and that's definitely what our goal was going out there,” said Sirianni.

Slot cornerback Avonte Maddox is on the sideline when Hurts is doing his thing but he’s always got one eye on what’s going on.

That was in reference to the Hurts’ final TD of the afternoon, a 24-yard masterpiece that had Saints defender Carl Granderson grasping at air and thinking about taping his ankles moving forward.

“When I seen him make that move, I was like, 'Oh, shit!' I was looking for the trainer so I could grab some tape to help that kid’s ankles,” laughed Maddox. “Even if that was me out there, I’d probably be calling to somebody else to tape me up. He’s definitely dynamic. [Number] One is always a baller and it’s exciting to watch him play.”

It’s become tradition for Hurts to downplay just about everything that happens on the field, good or bad, and the play that had jaws drooping just as easily could have been a pick-six from listening to the QB.

“I like winning,” Hurts said. “That’s the most significant thing we’ll get out of the day for me. We came into [the game], we played hard, we had some ups and downs in the football game, but in the end we were victorious.

“There’ll be a lot to learn from this game.”

Others think they’ve already learned something about this Eagles team which has magically shifted from a moribund club piloted by an overmatched coach and a QB not quite cut out to be an NFL starter to “sneaky contender,” at least to some.

No one was taking that kind of 180 seriously without a home win, though.

With that box finally checked, "playoffs?!" has turned from a Jim Mora-inspired joke to a real possibility due to what is the easiest schedule in the NFL the rest of the way.

The holidays have arrived and meaningful football is the Eagles’ gift to you.