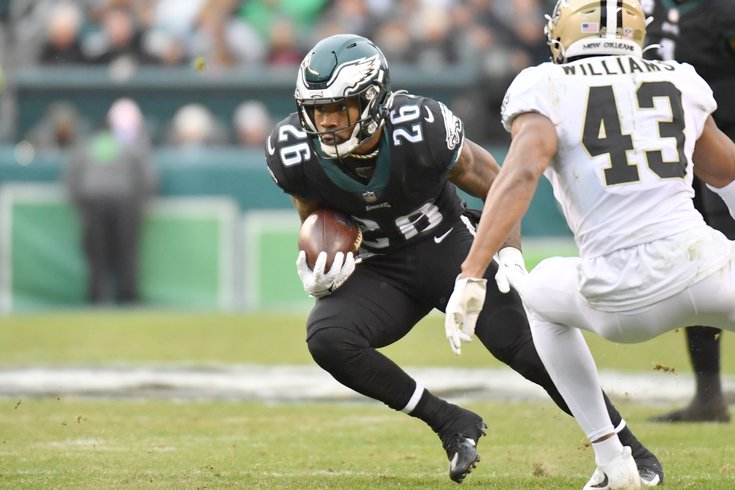 Miles Sanders got benched on Sunday, though he did eventually return.

In their Week 11 win over the New Orleans Saints, the Philadelphia Eagles played 78 snaps on offense, and 65 on defense. Let's just get right to the snap counts, and some notes.

Analysis: Hurts now has eight rushing TDs on the season. He is six behind the NFL single-season record for rushing touchdowns by a quarterback, which is held by Cam Newton. Here are the guys who have had at least 9 rushing TDs in a single season:

If the Eagles continue to be a run-heavy team down the stretch (why wouldn't they?), he's got a chance.

Analysis: Sanders fumbled deep in Eagles territory, leading the Saints' first touchdown of the afternoon. Later, he fumbled again, except he lucked out bigly because the officials ruled that his forward progress had stopped. In his postgame press conference, Sanders was asked what it meant to him that the coaching staff put him back out there.

“Everybody trusts me with the ball in my hands," he said. "All I can say is that I appreciate that to keep my confidence going throwing me back in there.”

Nick Sirianni sort of just went with it on a similar line of questioning.

"And so, it is. It was just, ‘Hey, forget that play. Next play. Next play.’ And I think that means a lot to guys when you show the confidence in them. And then you correct what's going on. And you say, ‘Hey, when you get in the traffic,’ -- what we talk about, we call this a clasp hand, you put that clasp hand on it. That's what we talked about and showed trust in him and belief in him. And I know that will be rewarding going forward with Miles."

Except... I'm not so sure the Eagles put Sanders back in the game super willingly. After he put the ball on the ground for a second time, it was the first snap of the drive, and he immediately got pulled out of the game in favor of Jordan Howard. He didn't go back into the game for the rest of that drive, or the next two thereafter.

It was only after a game-ending knee injury to Howard that Sanders got back in the game.

Analysis: Arcega-Whiteside has obviously been a disappointment since the Eagles took him in the second round of the 2019 draft, but give him credit for coming up with a huge reception in a big moment.

Reagor had 1 catch on 3 targets for -1 yard. It's the ninth time this season he's had 25 or fewer yards in a game, the sixth time he has failed to crack 10 receiving yards, and the fourth time he has either had 0 or negative yardage. He's sixth on the team in receiving yards, behind the TE2 the team traded five weeks ago and the RB4 who was a healthy scratch on Sunday. Hell, Darius Slay has more INT / fumble return yardage than Reagor has receiving yards this season.

Why is he still getting 55 snaps?

Analysis: Goedert was the Eagles' most heavily targeted player on Sunday. He was able to make it back into the lineup after suffering a concussion Week 10 against the Broncos.

Analysis: As we mentioned in our 10 awards, Mailata was a bit of an enforcer in this game, standing up for teammates and mixing it up with Saints defensive linemen. But we should also probably show the ridiculousness that is Jason Kelce.

Enjoy him while you can.

Analysis: There were several times throughout this game that I noticed Fletcher Cox playing with high energy. Perhaps he's beginning to buy in that this team can compete for the playoffs?

Analysis: Taylor injured his knee and did not return. Singleton got his snaps the rest of the way. Avery only got four snaps, which is a step in the right direction.

Analysis: Slay is in the concussion protocol. He's probably the Eagles' most important player on defense right now. They'll need him against the Giants next Sunday. Maddox also went down briefly with what looked like a stinger, but he was able to return.