The Sixers left the Wells Fargo Center with a 122-120 win on Wednesday night, snatching a win out of the fire with some heroic shooting late in the game. But Joel Embiid and the assembled press left the arena spooked, thanks to an invader during his postgame session with the media.

Reporters stood in the press conference room at "The Center" following the win to pick the brains of Embiid and his teammates before they leave for a West Coast road trip later this week. With Embiid the last man out, as per usual, we discussed the upcoming trip and whether he was excited for any particular games or matchups.

It was at this moment an unknown invader decided it was time to make an appearance. With Philly.com's Sarah Todd in the process of questioning Embiid, all hell broke loose. The chaos begins around the :06 mark of the video below:

During Joel Embiid’s press conference something started moving inside the ceiling above. Good chance it spooked just about everyone in the room...and Joel’s reaction is priceless #Sixers pic.twitter.com/aHD0EMtEpq

Embiid's face says it all. The unknown assailant continued unencumbered above all our heads in the press conference room, darting past team PR on the far side of the room toward the private area reserved for team personnel and their families/friends. Embiid carried on like a true professional, but the damage was done.

Following the incident, PhillyVoice conducted a thorough investigation* of the scene in order to best assess what happened, and to make sure we all know the scope of the problem we're dealing with here. The findings of the investigation can be found below.

*(Note: an investigation did not actually take place, beyond me sitting at my desk eating Snyder's buffalo pretzel pieces while rewatching the video in question, and discussing with colleagues at the arena afterward.)

Was there a rat in the Wells Fargo Center ceiling?

Did it sound like a rat? Yes. I hope most of you have not had the misfortune of being around mice and rats in your life, but the loud pitter-patter was too audible to be blamed on a mouse. An unnamed reporter in the room has also dealt with a rat problem recently, and volunteered that they believed it to be the same sound they'd heard before.

Did it look like a rat? Unclear. While the ceiling tiles in the press conference room are of the same quality of the basement in a college frat house, they are at least not transparent. Thus, we could only use our collective audio judgment to determine what was in the ceiling. In theory, it could be the Boogie Man, or the ghost of Sixers Past/Kwame Brown.

Did it produce the reaction a rat normally does? I mean, you tell me. 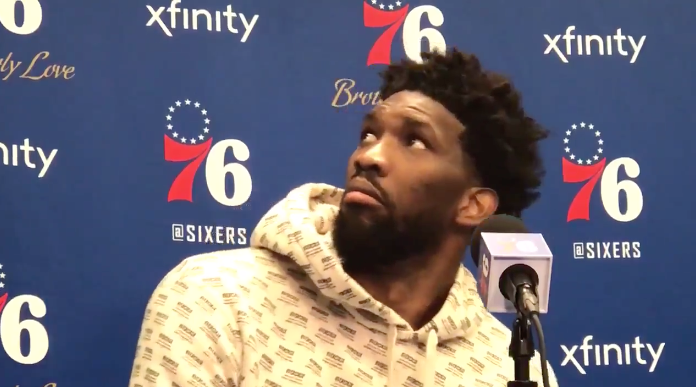 Are the bowels of the Wells Fargo Center a reasonable place to find a rat? Yes. The press conference room at the Wells Fargo Center is a pretty terrible setup, and you can tell the building was built at a terrible time to put in a new basketball/hockey arena. There are families and camera crew and all sorts of riff-raff who spill through the room following the game, because no one thought it would be a good idea to separate the area where you interview players and coaches from the place where the 15th lens on an NBC Sports Philadelphia camera needs to be stored.

A witness called the area, "an abomination for a professional sports arena," and, "a good example of why the Sixers don't acknowledge the Wells Fargo part of the arena by name in official press releases."

**(Note: The witness was me because I made those quotes up and they are not meant to be taken seriously by anyone.)

Does the unknown creature pose any danger to the team? Again, I must point to the photographic evidence.

Joel Embiid once killed a lion***. I think he knows when there's something around to be feared. What if the creature dropped out of the ceiling and attacked Embiid — or any other player for that matter — in the middle of a presser? It's bad enough that the Sixers have to worry about injuries. They should certainly try to avoid bringing back the black plague in 2019.

***(Note: Joel Embiid completely made up the story you probably heard a long time ago about him killing a lion.)

Who could the rat be? Unprompted, my Twitter followers took an interest in solving the case of the Wells Fargo Center assailant. Their fingers all seemed to point in one direction.

i was told Jerry's contract expired at the end of 2018 https://t.co/5lwdcaFGZp

PhillyVoice was unable to conclude the identity of the rat (??) in question. Any updates on the matter will be provided as appropriate.

Conclusion: Following this comprehensive investigation, I believe there is at least one (1) rat inside Wells Fargo Center.

May God have mercy on us all.