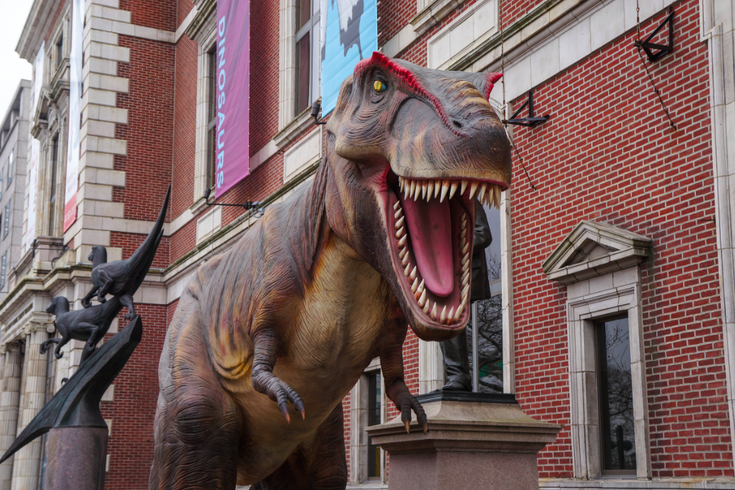 Courtesy of Academy of Natural Sciences/PhillyVoice

"Dinosaurs Unearthed" is the newest exhibit at the Academy of Natural Sciences of Drexel University. This dino guards the museum doors, but also poses for selfies.

The exhibit "Dinosaurs Unearthed" opens at the Academy of Natural Sciences of Drexel University on June 25. Animatronic dinosaurs that move, roar and tower over guests will be displayed in naturalistic settings. To make the dinosaurs look realistic, all have been custom-designed using the most recent scientific data.

“[The exhibit] makes you feel like you’ve boarded a time machine and travelled 67 million years back in time,” Academy president and CEO George W. Gephart, Jr. stated in a press release. “Dinosaurs are larger than life, and, let me tell you, they’re not just for kids.”

The exhibit was previously at the museum in October 2013, but is equipped with new interactive exhibits for 2016.

Visitors will be able to control the movements of some of the animatronic dinosaurs to make them roar, swing their tails and move their arms. Another feature is a weight scale that lets visitors measure their weight in relation to a dinosaur.

Skeletons, fossil casts of skulls, claws, horns, teeth, an egg and even dinosaur poop can be viewed in the exhibit, as well.

"Dinosaurs Unearthed" will be at the Academy until January but on the opening weekend, there are a few special activities planned.

A hand claw, lower jaw and teeth of Dryptosaurus, a dinosaur closely related to and alive at the same time as Tyrannosaurus rex, will be presented to guests. The meat-eating Dryptosaurus was discovered in 1866 in Gloucester County, New Jersey, and opening weekend is the only time the fossils will be shown to visitors.