Diving into the deep end of 'Hamlet' 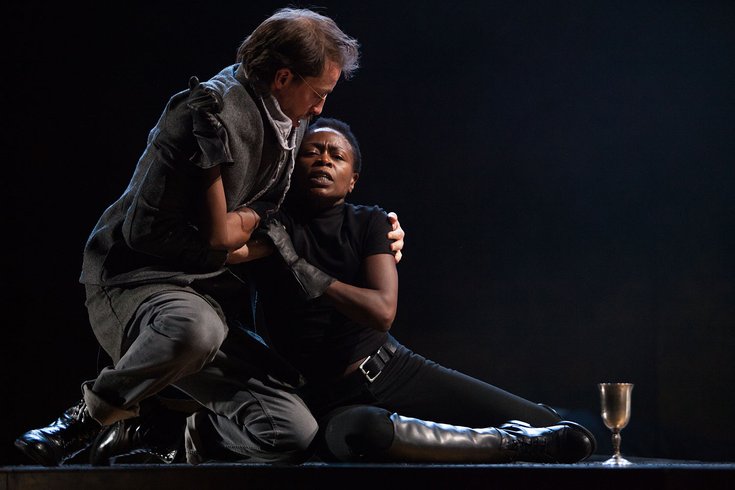 When most think of Hamlet, Prince of Denmark, arguably Shakespeare's most iconic character, they think of, well, a Danish man. That's why Zainab Jah was taken aback when The Wilma Theater offered her the role for their new production of "Hamlet."

"I thought, 'What are you kidding me? In case you haven’t noticed, I’m not Danish or male,'" she said.
The born-and-raised Londoner, whose family is originally from Sierra Leone, is not the first woman to take on the role, but the gender-swapped casting is definitely not the norm. For Wilma artistic director Blanka Zizka, though, Jah was her first and last choice.
The casting may shock a few fans of the well-worn play, but Jah has yet to see anything but favorable reactions.
"So far the responses have been really, really positive and encouraging; beyond encouraging," Jah said.
"Hamlet," which opened April 1 and runs through May 2, is a master work of Shakespeare's most emotionally charged dialogue. The tragedy follows a prince bent on revenge after his father is killed and his uncle seizes his throne. The play has three different versions and traditionally would run over four hours uncut. The Wilma's show has been edited down to create a sleek, modern political and psychological thriller that focuses on Hamlet within his society.
Thus taking on the mantle of the Great Dane is no easy feat, no matter who steps into his shoes. Hamlet is a roller coaster of a character, but Jah is taking the roiling plot and demanding physicality in stride.
"I literally just dive in head first every day because I don’t know if you can prepare for it. You just have to dive into the deep end and swim," she said.
The actor is no stranger to Shakespeare or "Hamlet" either. She's played Ophelia before, as well as Regan in "King Lear," Titania in "A Midsummer Night's Dream" and Friar/Sister Laurence in "Romeo and Juliet." Getting to speak Shakespeare's dialogue, speeches and soliloquies (think: "To be or not to be ...") is her favorite part of playing this iconic role. 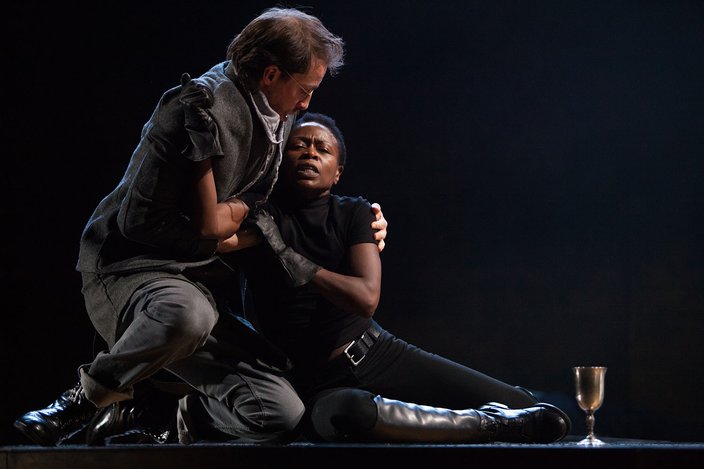 Photo by Alexander Iziliaev/The Wilma Theater
"The heights of the language, the height of the emotional peaks you have to climb every day, it’s astounding. Most of the time I go off stage and 'I think my God, I cannot believe I just did that. That was hard!' I mean, I’m drenched in sweat but really just buzzing with excitement and joy of getting to say those words and go to those places and leave them behind and go back into my real, every day life," she said.
The Brit comes to our neck of the woods by way of New York, having moved there after a career in modern dance brought her across the pond. She fell in love and got married there and has been performing on this side of the Atlantic ever since. She ended up in Philadelphia -- which she calls "a slightly cleaner New York" -- to perform in the Wilma's "The Convert" two years ago; Zizka enjoyed her performance and the rest is show biz history.
In addition to Jah in the powerful titular role, the cast of "Hamlet" reads like a who's who of the local theater set, from Krista Apple-Hodge and Keith Conallen to Sarah Gliko and Ross Beschler. After "Hamlet," largely the same cast will put on "Rosencrantz and Guildenstern Are Dead," the absurdist tragicomedy which follows two of "Hamlet"'s minor characters.
Jah, however, will be missing from that production as she travels to London and Sierra Leone to visit family. Though it will undoubtedly be hard to follow up "Hamlet," she's already looking toward her next project: creating a feature film with her filmmaker husband called "Reunion." (Look out for a Kickstarter for the project launching soon.)
And after that? Jah said there are plenty of projects she would love to work on, citing an appreciation for "Waiting For Godot" and the work of film directors David O. Russell and Steve McQueen. As for her temporary home, Jah said, "I actually love Philadelphia. I’m enjoying coming here and I’m hoping to come here more often actually."
Philly thespians and audiences surely hope so, too.