What has Doc Rivers brought to the Sixers this year? His players weigh in 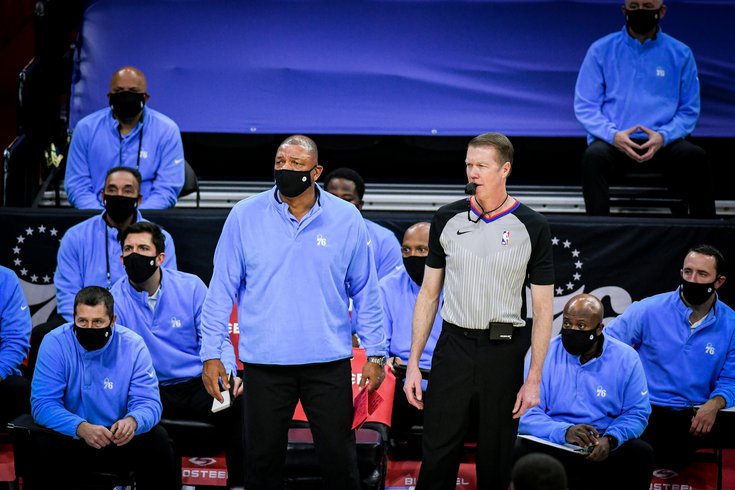 Danny Green has spent his entire career dealing with Doc Rivers-coached teams. His rookie year was 2009-10, the season that ended with seven grueling games between Rivers' Celtics and the Los Angeles Lakers, and he got even more familiar with Rivers once his Spurs had to start dealing with the Lob City Clippers. Green was not in Philadelphia to live through the grueling, gruesome 2019-20 season, and it's only his first year playing for his current head coach, but the veteran wing believes his strengths are obvious.

"Just challenging the guys that were here before he got here, and the new guys as well, but trying to change the atmosphere, change the environment, to have a championship-winning mentality environment, change the habits of guys they had some had bad habits before we got here," Green said after practice on Wednesday. "The things that he came in and tried to implement, change, adapt and adjust to, it's helped us a ton."

Accountability is everyone's favorite sports buzzword, but it's as fickle as anything else in the NBA. The Sixers believed they needed it last offseason, and they landed on a hire who left his previous job with numerous reports about his issues holding star players in L.A. accountable. Long gone are the days of tyrant coaches on the sideline who rule with an iron fist. Earning commitment from players takes nuance, communication, and knowing when and how to press certain buttons.

When Rivers led the Celtics to a title in 2008, it started with a simple word: "Ubuntu," roughly translated to, "I am because we are." Those Celtics, a trio of stars who came together in a single offseason to achieve together what they never had individually, and the group bought into a concept that Rivers asked Boston's rookies to explain to the group during the preseason.

These Sixers don't have a catchphrase or a team-building slogan — outside of the "Big Energy Chain" that can be won with strong sessions in the postgame weight room — but they have expressed appreciation for Rivers' ability to set a hierarchy that nonetheless encourages team basketball. If Embiid struggles in the post, Rivers is as critical (and perhaps more so) of the spacing as he is of how Embiid handles pressure. It can sometimes have the effect of protecting his star players and redirecting criticism into teamwide complaints, but the approach is appreciated by the full roster, even guys who admit it's hard to get a prideful room of men all on one page.

"I think he made it clear for everybody, what is our roles, you know, what was the expectation from the players, he didn't ask too much," Furkan Korkmaz said. "He just asked from everybody what we can do, and then bring it to the court. I think he made it clear, beginning of the season...it's hard as a player not to complain because we complain about everything. Our role, why I don't get shots up one more time or one more position, why we don't run pick-and-roll for me, but I think he set the tone beginning of the season, and then everybody was happy about their role."

It's a bit easier to establish that pecking order, mind you, when the pieces slide cleanly into place. Last year's roster was a mess of moving parts that would have been hard for anybody to decipher. Al Horford was paid to be both the starting power forward and Embiid's primary backup, designations that put him at odds with both Embiid and Tobias Harris, who has looked considerably better in a more natural role as a four. Josh Richardson was a two-guard by positional designation, but often a point guard in practice, and underqualified to play either at the level they needed him to in order to make that team functional. There were effective pairings buried in the shipwreck, but by the time the season was winding down, it was difficult to find anybody who was interested in remaining engaged enough to make those combinations work.

Whether you believe it's credit due to Rivers or the product of better roster management, what matters is that the players believe he has made a difference. Joel Embiid has gone on the record on multiple occasions about wanting to meet or exceed the expectations his head coach provided for him before the year. You or I don't have to think Rivers is the all-powerful Oz for his voice to have made a difference in the locker room. Hiring Rivers in the first place made the big dude happy, and that helped achieve the simple (but significant) goal of getting Embiid's best night-to-night.

Like any year in Philadelphia, there have been off-the-court pitfalls to navigate. The biggest was a move that never came to fruition: Philadelphia's pursuit of all-world guard James Harden, which went deep enough that players involved in talks were warned of the possibility they could be on the move. Those situations are delicate and can be hard to come back from depending on the player and the situation. Just look at John Wall, who looked like a Washington lifer up until the moment the Wizards entertained trade talks with the Rockets, at which point he demanded the trade go forward and later accused Washington's brain trust of lying to him.

Rivers, Green believes, is the sort of person who can make a situation like that easier to navigate, because he has been on all sides of that equation, living life as an NBA player, coach, and decision-maker.

"Some of the things that he's seen behind the scenes that didn't go down trade wise, trade deadline wise, player-wise, things in the locker room, he can, you know share that from a player's perspective and a coaching perspective of what needs to happen, what has happened, and how to adjust and adapt and fix it," Green said. "What needs to happen for us to collectively come together and what it takes...to hear him talk about his experience, Sam Cassell as well, some stories he has [are] unbelievable, non-stop giving stories. It gives us great insight in how they adapt and also then they can relate to us a little bit. It helps us to understand certain things and what they want from us, what they need from us."

The strange thing about this season is that improvements have come where perhaps the Sixers didn't expect them. Last year's team billed themselves as a defense-first group, and while Green has long been among the savviest team defenders in the league, the downgrade from Richardson to Seth Curry on that end was accepted in order to facilitate offensive growth. One of Rivers' big selling points, in fact, was his knack for shepherding top-10 offenses. The Sixers certainly looked a lot better and implemented a wider variety of sets, but they still hover around the middle of the pack on offense.

Defense has been their calling card, and it's an area where Rivers has been happy to dole out praise for coordinator Dan Burke. With both men taking their cues from longtime NBA coach Dick Harter, Rivers has called their partnership "seamless," and they've managed to maintain elite rim protection with Embiid while challenging the big man to show higher and put pressure on teams with different pick-and-roll coverages. The Sixers still play plenty of drop coverage, as all teams do during a long regular season, but they have mixed and matched and even won with concepts that are antithetical to their background, like the 2-3 zone that won them a game in Indiana this year.

And hey, a little gravitas never hurt anyone. Rivers' name was associated with collapses and expectations not met in Los Angeles, but that's not the case here. He has a chance to write a new chapter in his legacy with the Sixers, and for the younger players on the team, it's what he can do for them that resonates after a season with Rivers in the lead chair.

"Doc Rivers is just a name known, a household name when it comes to being a winner and having teams that have a very strong culture. He's coached many great players, and that reflects in his ability to handle some of the stars we have. And even me as like role players, he does a great job of coaching across the board," Matisse Thybulle said Wednesday. "He's one of those guys, and it's really impressive, just his ability to have tough conversations and go to those uncomfortable places that allow teams and individuals to push past wherever they're at, and get to the places where really you become successful."