Doctor Apple will see you now 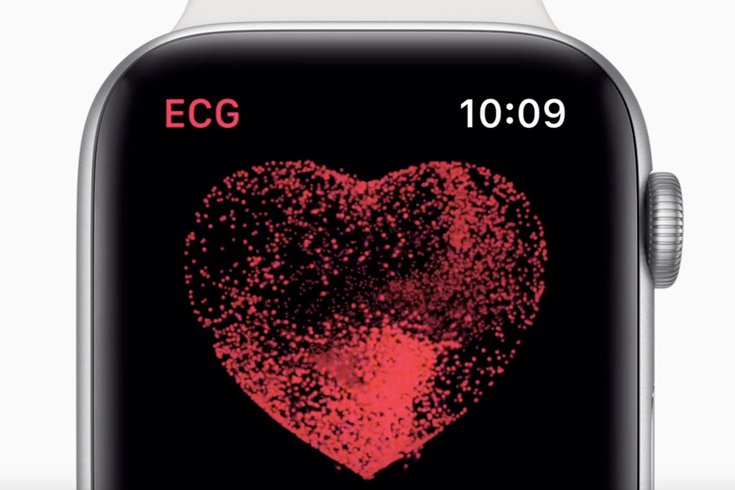 The ECG app on the Apple Watch Series 4 can generate a reading similar to a single-lead electrocardiogram.

The Apple Watch Series 4 offers an electrocardiogram, or ECG, app to read your heart’s electric signals. Apple states that the app is capable of indicating whether your heart rhythm shows signs of atrial fibrillation (irregular heart rhythm) or sinus rhythm (normal pattern). It is plugged as a “momentous achievement for a wearable device,” but before you head to your local Apple Store, let’s discuss atrial fibrillation and how this ECG app may fit into your heart health.

Strokes occur more commonly in individuals with other co-morbidities such as hypertension, diabetes mellitus, history of congestive heart failure, previous stroke, vascular disease and advanced age. It occurs less often in the relatively healthy young individual. This past month, researchers at Stanford released the Apple Heart Study to determine the ability of the Apple watch to detect atrial fibrillation.

The study was touted as the largest of its kind, enrolling more than 400,000 participants from all 50 states. The aim of the study was to notify patients with an irregular pulse via an app on the watch who would then self-identify themselves to the study coordinating center and be given an ECG patch to wear for seven days to confirm the presence or not of atrial fibrillation.

A watch notification was received by 2,161 participants (0.52 percent) and were most frequent in participants over age 65 (slightly >3.0 percent) and lowest among those under 40 (0.16 percent). Atrial fibrillation was confirmed in 34 percent of those who received a notification and wore the ECG patch. What we don’t know from this study is how, if at all, did the identification of atrial fibrillation result in a treatment and its resulting effect.

Clearly, due to the high-tech nature of this device the results were met with a significant amount of exuberance although the study was not without its limitations. Although a large study, the intended enrollment of 500,000 participants with 75,000 older than 65 were not met. This study relied on the self-reporting from participants and as such has the potential for a high number of false-positive reports and the unnecessary treatment of patients not to mention the undue anxiety it may create for many individuals. Many of the trial participants with detected atrial fibrillation were young and clinically asymptomatic that would not require treatment according to current treatment algorithms.

This trial does not answer in any way how to manage these patients. Rather, it sets the framework for future studies on how wearable consumer devices can be used to monitor day-to-day health issues, opening the door to further research into wearable technologies to detect and potentially prevent disease. Until we have further refinement in the technology and studies to define individualized treatment benefits we shouldn’t get lost in the hype.

For now, a call or trip to the doctor's office is still the best method of discovering and tracking health issues, but no doubt wearable devices will someday put more power on the wrists of the patient.