The statue of former Philadelphia Mayor Frank Rizzo was spray-painted with the phrase "black power" during the night of Thursday, Aug. 17, 2017.

When Wally “Diop” Rahman’s trio of attorneys entered the Criminal Justice Center on Wednesday morning, they were ready to defend the 40-year-old Germantown man charged with spray painting “Black Power” on the Frank Rizzo statue.

As with most stories surrounding the controversial statue, things didn’t go exactly as planned in Courtroom 903, though.

The defendant doesn’t exactly deny vandalizing the statue one August night, an act that resulted in charges of criminal mischief, possession of an instrument of crime, institutional vandalism and intentional desecration of a public monument.

So what was the sticking point in the case? Whether that 10-foot bronzed image of the former police commissioner and mayor meets the legal definition of being a “venerated” monument worthy of respect and admiration.

Coard announced that he had three expert witnesses – from the University of Pennsylvania, Temple University and Drexel University – prepared to testify that “it’s not.”

Walton quickly objected on the grounds that she wasn’t notified in advance of the impending testimony, not to mention the fact that the commonwealth argues that the statue is venerated.

Both the judge and the defense countered that “it’s not necessarily a surprise” that a discussion along those grounds would ensue, particularly since the issue directly applies to a charge filed against Rahman.

As such, the prosecution shouldn’t push back when told that witnesses would be called to discuss it, they maintained.

Walton countered that the defense was obligated to let her know, or file a report saying the witnesses would be there.

“Calm down,” said the judge in response to Walton’s objections, noting that she was “perplexed" by his argument.

Translation: Unless you haven’t been paying attention to the news this year, it’s pretty much obvious that the Rizzo statue has come under fire enough for the city to agree to move it to a yet-disclosed location from its place outside the Municipal Services Building.

After some 20 minutes of back-and-forth, the sides left the courtroom to pick a future date when the attorneys and witnesses would be able to return to actually start the trial. 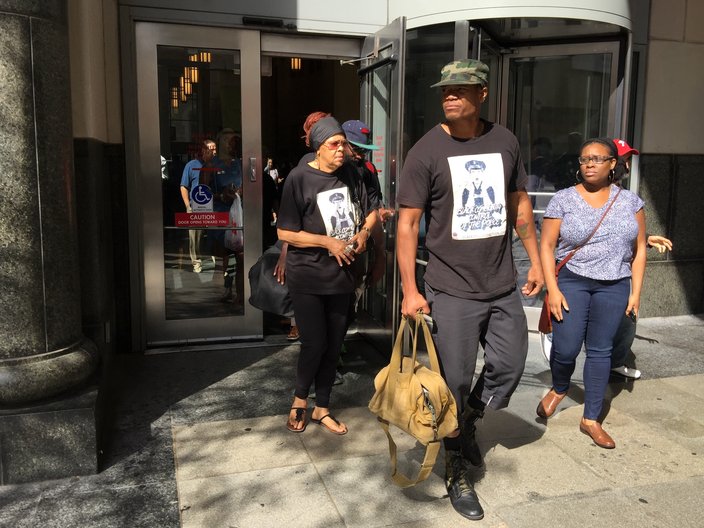 Wali Rahman leaves the Criminal Justice Center in Philadelphia on Wednesday, September 27, 2017 after learning that his trial has been delayed until late November. He is charged with vandalizing the Frank Rizzo statue.

“When you charge someone with murder, you tend to have a body,” quipped Coard of the commonwealth’s objection.

The defense attorneys noted that they’d be willing to stipulate – or concede – that much of the commonwealth’s evidence is valid. (Namely, that Rahman was responsible for the actions that were caught on film, but extenuating circumstances were at play.)

“We’re saying that because a person might have committed certain acts, that does not mean that he’s necessarily guilty beyond a reasonable doubt,” he said. “Say someone gets charged with shooting somebody, but (then it becomes evident that they did so) because that person pulled a gun on them. Those are extenuating circumstances that no longer make it a case.”

And with that, the prosecution and the defense offered a sneak preview of what will happen when Rahman returns to court for trial on January 10, 2018.