Hazleton firefighters called to rescue dog from roof, but find he just likes hanging out there 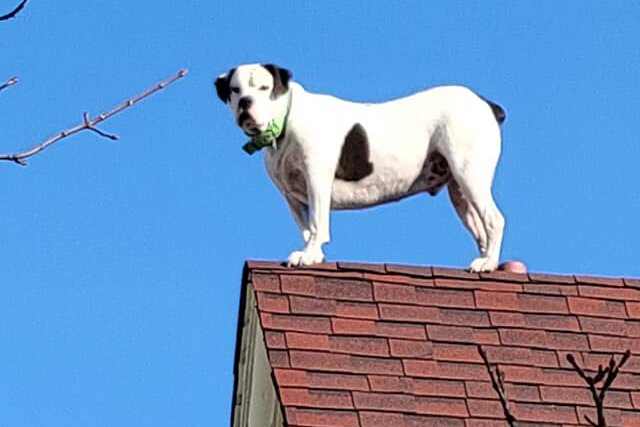 The fire department was called after a dog was spotted on the roof of a three-story apartment building in Hazleton, Luzerne County. But firefighters found out that the dog likes hanging out on the roof and often goes up there on his own accord to sunbathe.

A daredevil canine caused a false alarm earlier this week after he was spotted on the roof of a three-story apartment building in Luzerne County.

The Hazleton Fire Department was dispatched to the scene on Laurel Street after a concerned passerby saw the large dog and called 911 on Monday. Firefighters arrived to find the pet standing on the roof and noticed an opened third-story balcony door, which is most likely how he got up.

Upon speaking to a neighbor, first responders found out that the dog wasn't in any danger and frequently goes onto the roof on his own just to hangout and sunbathe, People reported.

"He comes and goes in the house as he pleases," the fire department said in a post on its Facebook page.

Dispatched for a dog on a roof on Laurel st crews arrived on scene found a big dog on the roof investigated and found that he comes and goes in the house as he pleases.

The dog made his way back into the apartment building and the fire department wasn't able to make contact with the owner.

One local resident commented on the fire department's Facebook post that this is not the first time the dog has been spotted making the climb.

"I've seen this dog on this roof before," she said. "Me and my friend drove back around the block to do something and he was already climbing back into a window."

But most people who shared their opinion were concerned for the dog and lashed out at his owner, with one commenter saying a report should be filed with animal control.

"I'd be a little leery about allowing my dog to do this for fear of the roof being slippery" another commenter said. "They don't land on all fours like the feline species does....Demonstrates the stupidity of the owner."

Other commenters shared stories about their own pets who engage in stunts and noted that the owner may not be able to control what the dog does when they're not home.

"I had a dog who would do this by pushing out the screen and would lay on the roof," one Facebook user said. "NEVER did we allow it. They were old windows and easy to lift – so he could nudge them on his own."

Last month, first responders in Bergen County were dispatched to a residence in a similar incident. A husky who was home alone got itself stuck on a roof after it pushed an air conditioning unit out of a second-story window and stepped outside. Firefighters secured the dog and safely brought it back into the house.