Donald Trump Jr. says attending The Hill School in Pottstown taught him about the working class

The president's son, 41, was enrolled in the eastern Pennsylvania boarding school as a teenager 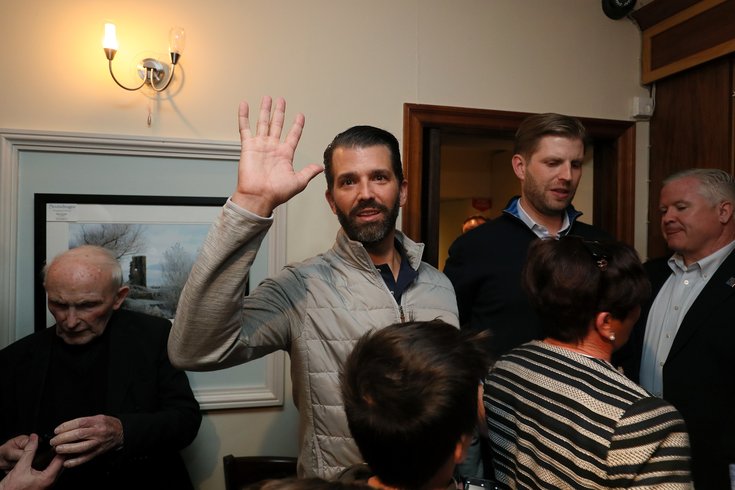 Donald Trump Jr. said at a political rally in Kentucky that he understands the working class because of the time he spent at The Hill School in Pottstown, Pennsylvania.

Donald Trump Jr. appeared at a rally for Kentucky Gov. Matt Bevin on Thursday, where Trump invoked Pottstown, Pennsylvania, of all places.

While discussing his upbringing, Trump talked about his time attending boarding school in Pottstown, which he said helped him understand working class issues, according to Kentucky Public Radio reporter Ryland Barton:

Trump Jr says he partly grew up in the rust belt because he went to a boarding school in Pottstown, PA, understands working class issues

"This not your grandfather's Democrat Party, this is socialism"

The school Trump was referencing is The Hill School, a boarding school located 40 miles outside of Philadelphia in Montgomery County. Trump attended The Hill School as a teenager, before enrolling at the University of Pennsylvania. He graduated from Penn in 2000.

Trump's classification of Pottstown as part of the Rust Belt is up for debate, but since the easternmost border of the loosely-defined region often ends around Allentown, we won't haggle.

His use of The Hill School as a beacon of working-class values, however, has far less wiggle room.

The year Donald Trump was elected President of the United States, Business Insider named The Hill School the 34th-most elite boarding school in the country.

While the school says roughly 40% of the student population receives financial assistance, an average U.S. household using 69% of its total income — or, in the case of boarding students, 100% of its total income, along with an extra $38 — for secondary school tuition wouldn't make much sense.

Ultimately, the realities of The Hill School's demographics don't at all align with Trump's working-class message.