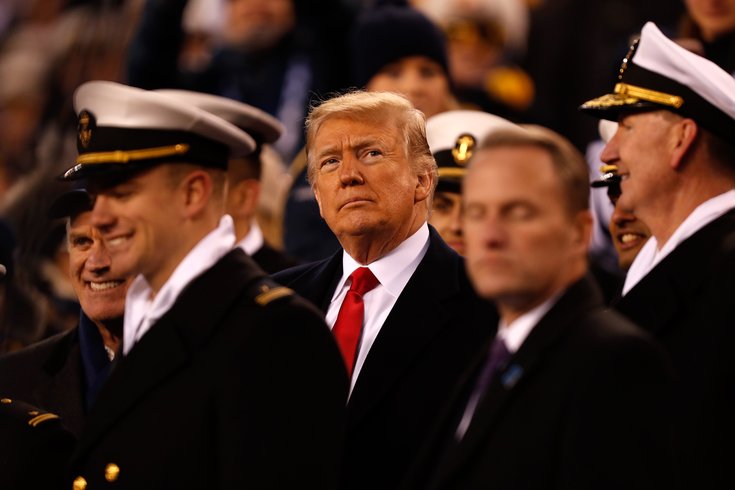 President Donald Trump, seen her during the 119th Army-Navy game at Lincoln Financial Field, will be in Philadelphia for the two rivals 120th matchup on Saturday.

The game starts at 3 p.m. at Lincoln Financial Field. This will be Trump's second straight year attending the classic matchup between the country's military academies as president. Last year, he participated in the coin toss before standing on the sidelines with Gen. Mark Milley, the 20th Chairman of the Joint Chiefs of Staff.

Trump also previously attended as the president-elect in 2016 when the Army-Navy game took place in Baltimore.

Trump is the 10th sitting president to attend the game. Theodore Roosevelt was the first in 1901. The tradition dictates that the president is to stand on the sidelines for one team during the first half before switching to the other team's sidelines for the second half.

More than 70,000 people are expected to attend the 120th Army-Navy game. The U.S. Naval Academy leads the head-to-head series with West Point and stands at No. 25 in the latest College AP poll with a 9-2 record. Army's record this season is 5-7.

Trump has attended several major sporting events in 2019, including Game 5 of the World Series in Washington D.C., where he was booed by fans. He also attended a UFC fight in New York on Nov. 2 and  the Alabama-LSU football game on Nov. 9.