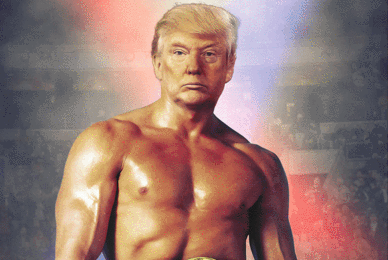 President Donald Trump tweeted a photo of his face superimposed over the body of Rocky Balboa, played by Sylvester Stallone. The image is from the cover of "Rocky III."

At a time when Donald Trump is facing the sharpest scrutiny of his presidency, he would like the world to behold that "gorgeous chest" he described at a Florida rally on Tuesday.

It doesn't matter one bit if it's not his actual chest, of course.

Trump tweeted a photo Wednesday of his own face superimposed onto the body of Rocky Balboa, the fictional Philadelphia icon whose underdog lore the president would like to employ as he faces possible impeachment.

For those wondering why Trump tweeted a picture of himself as a shirtless Rocky Balboa, perhaps it has something to do with this moment from his rally last night about his Walter Reed visit:

"The first thing they do is take off your shirt. Show us your gorgeous chest!" pic.twitter.com/poYiYRIdsd

The image apparently comes from a poster that was made by one of the president's fans.

Although the photo Trump used is from the cover of "Rocky III," Wednesday also happens to be, coincidentally, the anniversary of the release of "Rocky IV" – the one when Rocky defeats the Russian, Ivan Drago.

On this day in 1985, Rocky Balboa shocked the world, knocking out Ivan Drago in the 15th round 🥊 pic.twitter.com/K7km5lWgWZ

Whatever Trump's reasons for the tweet may be, he invited an avalanche of jokes at his expense.

Oh, this is wonderful/horrific. Many thanks to @TDFKA and whatever psychopath made the one on the left. pic.twitter.com/Car3XWPENB

This is blasphemy, yo.

Trump is too much of a chump-coward to so much as get out of his car in Rocky’s K&A neighborhood.

And if he did, it’s a safe bet that he’d get bum-rushed outta there in a hurry. #Philly https://t.co/Sg3QtOst9W

Philadelphia has seen plenty of Rocky appropriations over the years, but this might be the worst of the bunch. Anyone waiting for Sylvester Stallone to deliver Trump a knockout punch will be disappointed to learn he's a big fan of the president, however.