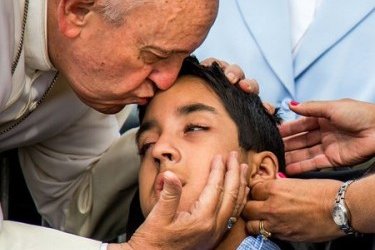 Friends and Family of Michael Keating/Crowdwise

The family of a disabled boy blessed by Pope Francis during his Philadelphia visit has received more than $100,000 in donations from strangers who learned of his story.

A viral photo of a disabled Chester County boy photographed being blessed by Pope Francis has resulted in more than $110,000 in donations toward his medical care.

The boy, 10-year-old Michael Keating, has cerebral palsy. His twin, Chris, doesn't. The boys were adopted by Kristin and Charles Keating at birth.

Charles Keating is the director of Bishop Shanahan High School's marching band, which performed for Pope Francis during his visit to Philadelphia last month, giving Michael the unique opportunity to be in his presence.

After Michael's photo with Pope Francis went viral, The Washington Post and other media sources tracked down the family and wrote stories on them, including their financial struggle to fund his care.

Strangers have since offered their prayers and monetary help, raising more than $110,000 and counting.

To donate to the Keating family, visit the Crowdrise funding site.