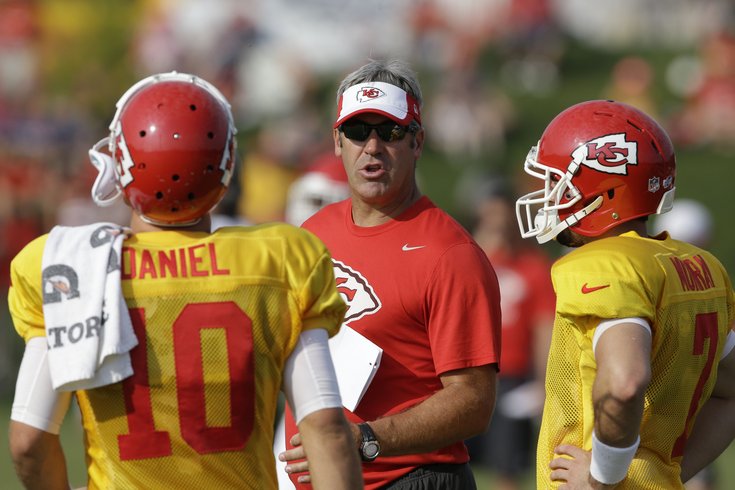 Doug Pederson will be the Eagles' 23rd head coach.

About two and a half weeks after firing Chip Kelly, the Philadelphia Eagles have found their franchise's 23rd head coach, soon to be former Chiefs offensive coordinator Doug Pederson, per Les Bowen of the Daily News.

Doug Pederson will be the #Eagles coach, league source confirms.

PhillyVoice.com can confirm via a source that it will indeed be Pederson. The Eagles cannot confirm until the Chiefs' season concludes. An Eagles spokesman said only, "We have concluded our search for a head coach. No further interviews are scheduled."

The Chiefs will play the New England Patriots this Saturday in the divisional round of the playoffs.

Pederson is an Andy Reid protege. Reid was Pederson's quarterback coach when Pederson was a player in Green Bay in 1997 and 1998. When Reid landed the Eagles' head coaching job in 1999, he brought Pederson with him to be his temporary starting quarterback and mentor to rookie Donovan McNabb.

After his retirement from playing in the NFL in 2004, Pederson became a high school football head coach, until Reid hired him in 2009 to be an offensive quality control coach for the Eagles. In 2011, he was promoted to be the quarterbacks coach.

Over the last three years, the Chiefs' numbers are very consistent. They are a running team with overall unimpressive numbers, but they do a tremendous job limiting turnovers and allowing the strength of the team, the defense, to win games.

That style of play could mesh well in Philadelphia. The Eagles clearly have more talent on the defensive side of the ball, but they have been put in an impossible situation over the last three years by Chip Kelly's unrelenting fast-paced offense.

The Chiefs' ability to limit turnovers can be at least partially attributed by quarterback Alex Smith, who has a conservative approach to the position. However, if Pederson could bring the ability to hang onto the football with him to Philly, that would improve what has arguably been the Eagles' biggest downfall over the last two seasons:

Since the Eagles and Chiefs changed over their coaching regimes in 2013, the Eagles have had the third most giveaways in the NFL. Over the last two seasons, they've turned it over more than anyone.

Conversely, over the last three years, the Chiefs have only turned the ball over 50 times, which is third best in the NFL:

Pederson was not the Eagles' first choice. Per a source, former Giants offensive coordinator Ben McAdoo was the Eagles' top target, but he was hired by the Giants. The Eagles then reportedly turned their attention to Tom Coughlin, who also rebuffed them.

The Eagles also reportedly have begun to hire a staff of assistants. According to ABC-7 News in El Paso, Texas, longtime NFL assistant coach Ken Flajole will join the Eagles in some capacity, likely as a defensive assistant.

The Eagles' head coaching search mostly included former quarterback coaches. Quarterback has been a position of extreme instability on the Eagles' roster since McNabb's heyday.

Next on the agenda for the Eagles will be to hire a coaching staff and figure out that pesky quarterback situation. We'll update as we learn more.