The Cape May building dates back to the 1800s. 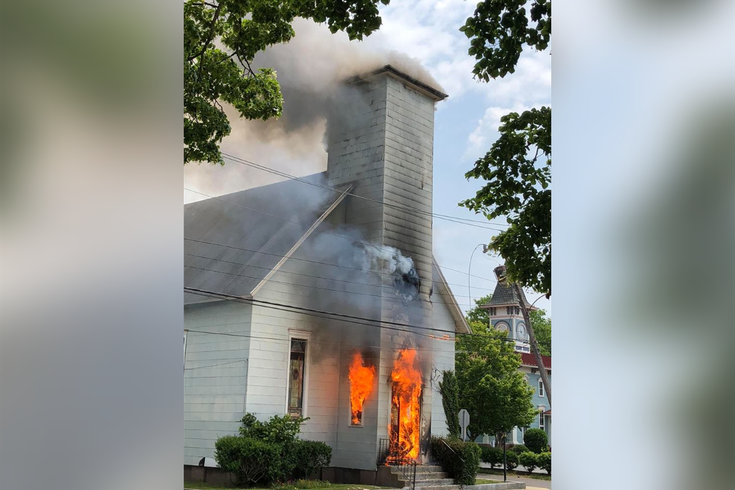 A historic church in Cape May suffered fire damage Saturday when a downed utility pole set the building aflame.

According to reports, the two-alarm fire began around 11:30 a.m. Saturday, when a commercial truck caught a guide wire that pulled down a utility pole, crashing into the Allen African Methodist Episcopal Church at Franklin Street and Osbourne Court.

The City of Cape May Fire Department posted two videos of the fire on its Facebook account, showing flames tearing up the church’s front entryway as smoke runs through the building.

A pole with down wires fell upon a nearby church causing a fire. The church was located directly across from the Capemay fire department pic.twitter.com/Hkx0Nv5qie

The fire occurred directly across the street from the Cape May Fire Department, though firefighters were reportedly delayed, according to NJ.com, because of the building was electrically charged. The power first had to be shut down by Atlantic City Electric before the firefighters could intervene and put water on the flames.

According to officials, once electricity was turned off, the fire was “under control” in about 15 minutes. The fire was entirely extinguished about 90 minutes after it was first called in.

Though there were no injuries, the church, which had undergone some renovations over the last several years, suffered considerable damage. Code department officials are now inspecting the extent of the damage.

The original structure dates back to the 19th Century. See more photos of the post-fire damage below.