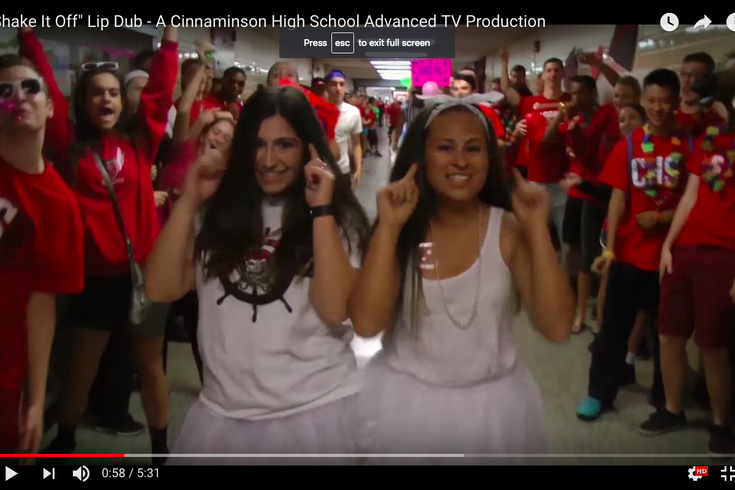 A clip from a 2015 lip dub music video of Cinnaminson High School students in South Jersey dancing to "Shake It Off" by Taylor Swift.

Sony Music Entertainment has taken issue with a South Jersey high school music video posted to YouTube this week and is threatening to take it down. And these students aren't happy.

Sean Wilson's Advanced TV Production class is in charge of the videos, and this year the theme was an '80s medley, CBS Philly first reported. Wilson said students spent more than two months on the video and chose the songs wisely, as to not violate YouTube's music policy or online fair use policies.

"They all were and still are listed as being OK for use, as long as we weren’t trying to profit off of them, which, as a school of course we were not – our YouTube channel is not monetized,” Wilson told CBS. “We designed dance routines, got costumes, practiced the choreography, planned special effects.”

But the classic "Wake Me Up Before You Go-Go" Wham! song caused trouble. It was only used in the video for about 30 seconds, Wilson said. But through a YouTube notification, Sony has flagged the video and is threatening to remove the video if the school does not retract its appeal, Wilson told CBS.

"Their position just seems like such an out-of-touch way of handling the way people produce and consume media today," Wilson said. "The other artists whose songs we used allow it because we are not a monetized channel and they reserve the right to stick ads before our video, which we have no problem with. We don’t understand why they have to be the only ones with an issue."

Wilson told CBS he even appealed to Sony twice that the song was fair use. Fair use is the right to use copyrighted material without permission or payment under some circumstances. Here's more information about fair use policies online.

But so far for Cinnaminson, no dice.