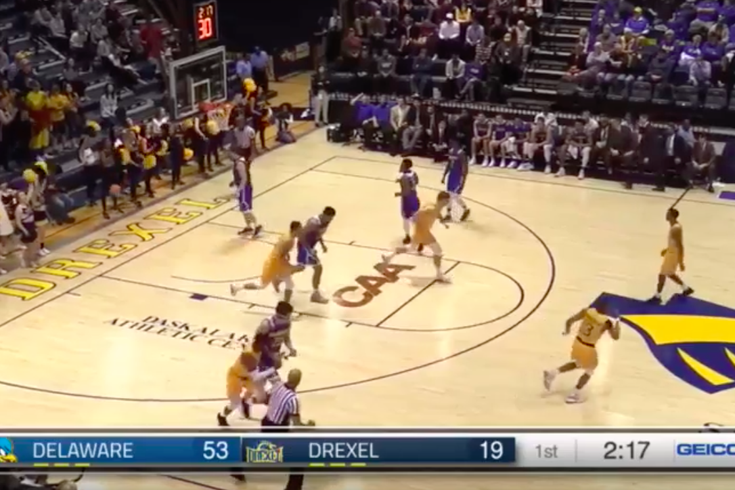 The Drexel Dragons would erase this 34-point deficit to beat the Delaware Blue Hens for the largest comeback in NCAA Division I history.

At one point in the game, the Dragons trailed the Delaware Blue Hens by 34 points. When regulation was over, they were up, 85-83. How the heck did that happen?

The Dragons closed the game by outscoring the Blue Hens, 22-6, over the last 6:25 and had 10 straight points at one stretch to make it a two-possession game. The 10-0 stretch started and ended with [Tramaine] Isabell three-pointers. After trailing for the entire game, the Dragons' Kurk Lee nailed a three-pointer with 4:22 to go and Isabell converted a three-point play on the next possession to tie the game at 79-79. Drexel went ahead for the first time on an Isabell jumper with just under two minutes to go. The teams twice swapped baskets before Isabell was fouled on the three-point attempt in the closing seconds. Delaware had one last chance, but Eric Carter's half court shot hit just backboard and Drexel pulled off the comeback.

As the NCAA noted, the home win marked the largest comeback in men's Division I basketball history. The Duke Blue Devils, who previously held the record, graciously conceded the feat. Per the NCAA:

24,527: Days between largest comebacks in Division I history (including Thursday night). Before Thursday, Duke’s 32-point comeback against Tulane on Dec. 30, 1950 stood as the largest deficit a team overcame for a win. In other words, it's been 67 years, one month and 23 days. After trailing 54-22 at one point in the first half, the Blue Devils came back to win 74-72.

You can watch highlights of the historic game below.