Philly has its very own Uber karaoke show host on YouTube, and his name is Driver Ed 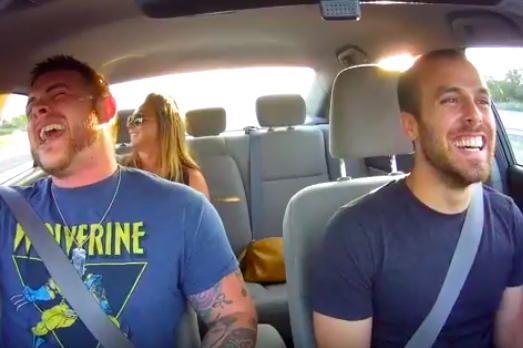 On his YouTube page "Driver Ed" Philly Uber driver Eddie Doyle, 30, has started posting videos of him and his passengers doing "Uber Karaoke."

Eddie Doyle came up with it before James Corden had "Carpool Karaoke" — just for the record.

Doyle, also known as Driver Ed on YouTube and in his Uber, has even got the instrumental mixtapes he made back in 2015 to prove it.

The Delaware County native and 2010 Temple graduate has filmed about 30 or so karaoke videos with his passengers — all of whom consent to being filmed and know they might end up on the web ahead of their impromptu performances, Doyle told PhillyVoice on Friday.

His passengers even take his information, just in case they (soberly) change their minds the next day. He's not trying to portray anyone in a bad light, he said.

So far, he's only published three of the videos because, let's face it, some people just don't deliver.

"Sometimes it just doesn’t pan out or they don’t want to be put on video," Doyle said. "I always think if I was in an Uber and I was going out, I don’t know if I would volunteer to do it. Especially because it takes a lot of trust to know that I’m going to edit them properly … and know that I’m not going to abuse the power that they’re going to give me."

But the really good performers are hilarious to watch and even better to sit next to, he said.

His favorite so far was his most-recent video. The guy really goes for it with the "Fresh Prince of Bel Air" intro song and belts out "Stand by Me" by Ben King. He even does a little ad-lib, which is admittedly hilarious.

"Whenever somebody is around you and they’re excited and passionate and having fun it just makes you have fun as well," he said. "I’m just trying to share that fun and share that absurdity with the world because it’s always fun when the Uber is just as fun as being out."

"It makes me respect and appreciate people who can just be themselves and put themselves out there," Doyle added.

A go-to song that's guaranteed to bring a passenger out of their shell?

Mr. Brightside by The Killers. Oh, and the "Fresh Prince of Bel Air" intro song. Duh.

Doyle's idea for Uber karaoke started back in 2015 with those mixtapes. But other things got in the way back then — taking classes at the University of Pennsylvania and doing research on addiction there, working at a summer camp, Uber-ing around fired-up Eagles fans before the Super Bowl, and namely penning his now-completed book, "I Hate You Jimmy," which is the reason behind his YouTube persona, he says.

"I was like, I’m gonna do this, write a book, write some screen plays, and ... I was told I need to build a following if I want to publish a book. So I thought, 'Oh, why don’t I make a YouTube channel?' Especially because I had started driving Uber. The whole YouTube thing was to provide a platform for my book."

He's usually looking for customers and singers on Friday and Saturday evenings, trying to catch people out and in a good mood.

"Sometimes I know people are leaving a packed club, shoulder to shoulder," he said. "But I guarantee my Uber is more fun."