Ride-sharing has cut DUI arrests by 17 percent in Philly since 2010, law firm says

For all the convenience that Uber and Lyft have brought to our lives since the start of the current decade, the greatest social benefit of ride-sharing services may be that they're putting a dent in drunk driving.

New data released this week by Moll Law Group, a national injury law firm, indicates that Philadelphia has seen a steady decline in DUI arrests since 2010, when Uber made its debut in many big U.S. cities. 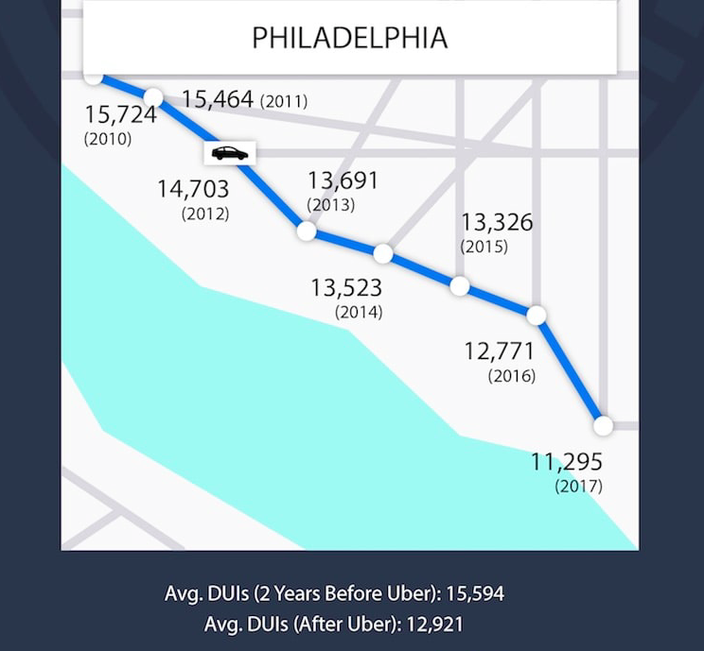 DUI arrests have declined by 17.14 percent in Philadelphia since 2010.

Uber has touted its impact on drunk driving since the release of a 2015 report that identified a related decrease in drunk driving accidents where its service was in operation. At the time, Uber was engaged in legal battles to gain recognition for transportation network services in states and cities across the country.

Researchers at the University of Pennsylvania's Perelman School of Medicine put Uber's road safety data to the test last year, conducting a study on drunk driving accidents in cities where the service was temporarily banned and then reinstated.

RELATED: Penn professor highlights why your rideshare driver could fall asleep at the wheel

In cities including Portland, Ore. and San Antonio, Texas, the Penn researchers found evidence confirming that there were fewer accidents when Uber was allowed to operate legally. In other cities, such as Reno, Nev., the evidence was not as conclusive.

The Moll Law Group study showed the biggest deceases in DUI arrests in San Diego, Calif. and Las Vegas, Nev., where the cities saw declines of 32 percent and 37 percent during their respective periods of available data.

"There’s no doubt Uber has changed the way we travel, but whether this downward trend of DUI arrests continues remains to be seen," the law firm said in a statement.

"Regardless of what the future holds, these numbers certainly shed interesting insight on the impact ride-sharing has had on drunk driving."