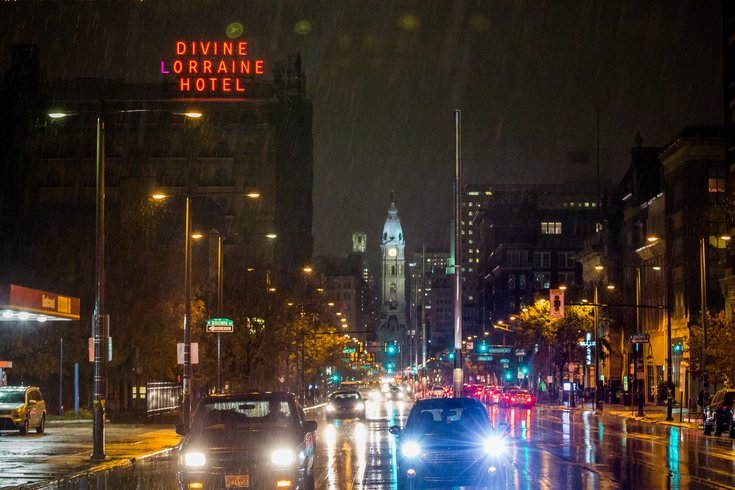 The signs on the north and south side of the historic Divine Lorraine Hotel were re-lit Wednesday, Nov. 9, 2016.

The last thing most Uber or Lyft users are thinking about when requesting a ride late at night is whether their driver has had enough sleep.

As independent contractors often using rideshare programs as a side hustle for extra income, however, sleep deprivation could be a real issue objectifying the safety of both rideshare drivers and customers, a new article authored by a professor at Penn’s Perelman School of Medicine suggests.

Dr. Indira Gurubhagavatula highlights that, as contract workers, rideshare drivers are not screened for medical problems that can impact driving alertness, including sleep apnea (a condition that has been linked to several recent train accidents).

Additionally, the demand for rideshare sends drivers to work at all hours, possibly feeling incentivized to keep going past what is appropriate from a personal health perspective.

About 328,000 car crashes in the United States involve a drowsy driver every year, the AAA Foundation for Traffic Safety estimated. About a third of those end in injury, while about 6,400 result in a fatality.

Both Uber and Lyft have made strides toward implementing sleep regulation in their drivers. Earlier this year Uber began requiring drivers to go offline for six straight hours if they have been driving for 12 hours. Lyft implemented the same requirement after drivers’ 14-hour shifts.

A great number of rideshare drivers work for both Uber and Lyft, however, which gives drivers a way to skirt the regulations. Additionally, if drivers are using rideshare as a secondary source of income, that means they could be getting behind the wheel after a full day of work and possible sleep deprivation.

“This measure is encouraging, but it is insufficient to impact driving safety appreciably, particularly since many of these drivers are already working extended hours and tend to drive at non-traditional times when sleepiness may peak,” the abstract reads.

“Therefore, it is the position of the American Academy of Sleep Medicine that fatigue and sleepiness are inherent safety risks in the ridesharing industry.”