Man accidentally takes $243 Lyft from Brooklyn back to Philly 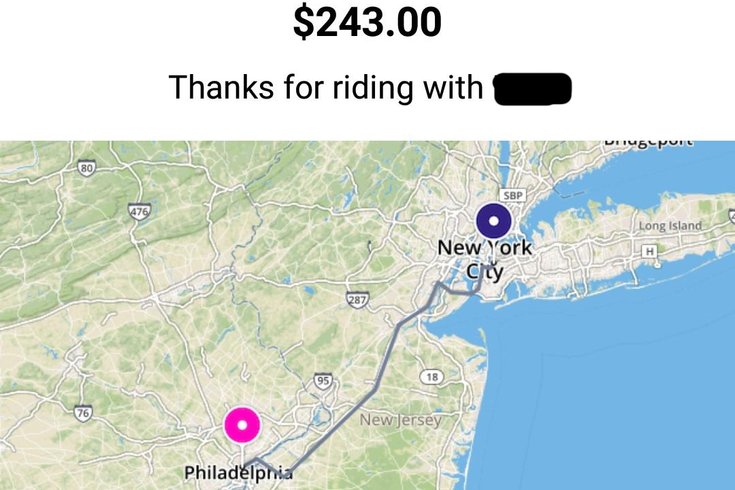 Oops: Instead of going back to his friend's house in Brooklyn, Morgan Boyle's Lyft dropped him off in his home city of Philadelphia.

After a long night of partying, one can find himself waking up in a place he didn't expect to be in the morning; a friend's couch, the floor, perhaps even an empty bath tub, for example.

For Morgan Boyle, it wouldn't normally be a surprise to wake up in a Lyft dropping him off on Girard Avenue at a location not far from his Fishtown apartment. Normally, however, the 36-year-old hadn't started the night hours earlier visiting friends in New York City.

That's exactly what Boyle said happened to him in the wee morning hours on Sunday.

"Holy s***, we're back here in Philadelphia," Boyle said he thought once making the realization he had just spent a couple hundred dollars on a Lyft ride and unintentionally traveled home all the way from Brooklyn.

Back up to Saturday night. Boyle had driven to New York to go out with some buddies, and they went to see some friends who were deejaying at a place called the Museum of Sex. As the night went on, they found themselves out and about in Brooklyn.

Eventually, the group decided to reconvene at an apartment only a few blocks away. While most of them walked there, Boyle and a friend opted instead to get a Lyft because it was raining.

"If I stop moving at a certain hour of the night I just fall asleep," Boyle told PhillyVoice on Monday.

What happened between pickup and dropoff isn't completely clear to Boyle because, well, he and his friend were snoozing. What he does adamantly stand by is that he initially picked the correct Brooklyn address when he called the Lyft.

Boyle theorizes he accidentally bumped or touched his phone while asleep — a butt dial of sorts — causing the Lyft to redirect to a spot he had previously been taken to in Philly.

By the time Boyle and his friend came to, it was 8:30 a.m. It was still raining, but something was off. They hadn't made it back to their friend's place; instead, they were near the corner of Seventh and Girard. The driver wished them goodbye before Boyle really understood what had happened, he said. So there he was, unintentionally back home with a $243 Lyft bill to boot. 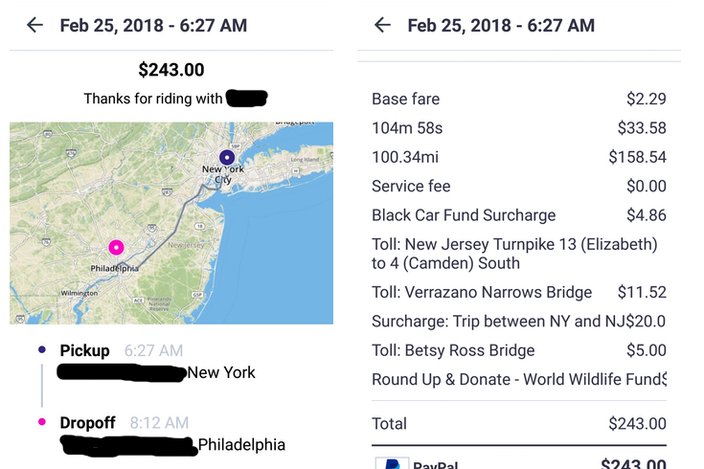 The details of Morgan Boyle's accidental Lyft ride from Brooklyn back to his home city of Philadelphia.

"It was an interesting end to the night," said Boyle, who seems to have a good sense of humor about the whole thing.


Nevertheless, $243 is nothing to scoff at for Boyle, who works in commercial real estate. He challenged the bill with Lyft. While he takes responsibility for falling asleep, he's suspicious as to why the driver would, without trying to wake them up, accept his requested reroute while the two were sleeping.

"I feel like this is a driver error," Boyle said. "There's no way you should be traveling two states away with people passed out in your car."

"However, after speaking with the passenger it appears that this was truly a misunderstanding," Coriell said. "We regret the inconvenience this caused and have elected to reimburse the cost of the ride."

Presented with Lyft's explanation, Boyle said he still questions a few things with the company's accounting and sticks by his version of events, but ultimately accepted the refund and moved on.

"I'm happy with the outcome so I didn't press them too hard," Boyle said.

Meanwhile, Boyle's roommate, Justin Berger, has enjoyed needling his friend over the whole debacle. Boyle had left his keys in New York, and was banging on the door to their apartment Sunday morning before a different roommate came down to let them in.

Shortly after Boyle explained himself, Berger took to Facebook to poke fun at him. The post has since gotten more than 600 likes and 16 shares.

"I thought it was funny so I posted to Facebook to shame him and fell back asleep," Berger said. "When I woke up a few hours later, the post had gone a little viral and I’d say they are both pretty shamed!"

Boyle and his friend were able to catch a ride back to Brooklyn from another friend headed to North Jersey. He retrieved his car and was again back in Philadelphia by late Sunday evening, this time on purpose. As for his takeaways from the incident, he said definitely don't fall asleep in a Lyft and always double-check your destination.

He jokingly added: "The real takeaway is I should have listened to my mother, 'Never get into a car with a stranger.'"