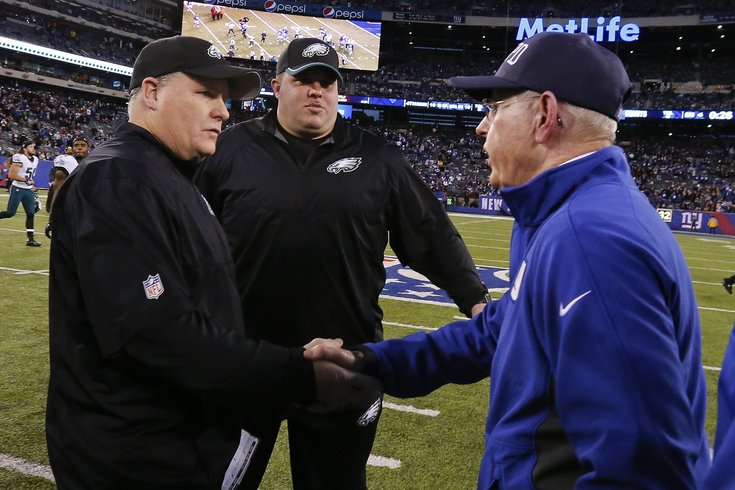 For the second straight year, the Eagles will close their season at the Meadowlands.

The Eagles' 2015 opponents have been known since Week 17 of the 2014 season wrapped up, but we didn't know the order in which they would play them. Now we do.

The Eagles will head into 2015 facing the 23rd most difficult schedule, or 10th easiest if you prefer it stated that way instead. The Eagles' 2015 opponents had a combined record of 121-134-1 in 2014, and a combined point differential of -155. Here's a snapshot of the Eagles' schedule, with analysis of each game thereafter:

For the first time since 2007, the Falcons will enter the season with a coach other than Mike Smith, who compiled a 66-46 record during the regular season, but just a 1-4 record in the postseason. The Falcons have always had an explosive offense, but their defense was ranked dead last in yards allowed and 27th in points allowed in 2014. Smith is out, and former Seahawks defensive coordinator Dan Quinn is in to try to fix Hotlanta's hot mess on D.

Get that artificial crowd noise ready, Falcons. It's prime time!

The Cowboys were among the surprise teams in the NFL last year, winning 12 games during the regular season, and then one in the playoffs. Give the Cowboys' coaching staff a boatload of credit for recognizing their deficiencies a year ago and masking them. Since Jason Garrett became the head coach, the Cowboys had an extremely lopsided run:pass ratio. In 2014, they changed course drastically:

Behind a great run-blocking offensive line, DeMarco Murray led the NFL in rushing yards by a margin of almost 500 yards. They controlled the ball, ate clock, converted third downs (47.3%, 2nd best in the NFL), and kept their suspect defense off the field. Defensively, while not a particularly accomplished bunch, the Cowboys led the NFC with 31 forced turnovers.

But it all started with that incredibly effective run game. Was Murray a huge factor in the Cowboys' success, or can anyone run behind that Dallas OL? We'll see.

In their all-time series history, the Eagles are undefeated against the Jets, at 9-0. Fortunately for the Eagles, as of the schedule release, the Jets are even more unstable at quarterback than the Eagles.

• Three of those 20-point losses came to teams with six or fewer wins.

• They had the worst point differential in the NFC.

Conclusion: The 2014 Redskins were a dumpster fire, and yet they still found a way to end the Eagles' season Week 16 a year ago.

In games Robert Griffin III played the majority of the game, the Redskins went 1-6. He threw four TD passes on the season, while being picked off 6 times and fumbling 9 times. And yet, the Redskins found it necessary for some reason to name him the starter... in February. The Redskins remain the doormat of the NFC East.

In 2014, Drew Brees, who is now 36 years old, put up numbers worse than his career Saints averages in the following categories: TD passes, interceptions, yards per pass attempt, QB rating, and sacks. A year ago, he lost one of his favorite targets in Darren Sproles. This offseason, he lost his best target in TE Jimmy Graham, and the number one receiver for the entirety of his career with the Saints, Marques Colston, has had declining numbers each of the past two seasons.

The Saints' offense was once a juggernaut, but it is beginning to look more and more ordinary.

The Giants have simply been a bad team the last two years. In 2014, the teams they beat had a combined average win total of 5.17 games.

In 2011, the Eagles won their last four games, which led to some false hope that they had turned things around. Andy Reid kept his job, and the Birds went 4-12 the following season.

In 2014, the Giants won three of their last four after starting the season 3-9. Are those three wins false hope? Tom Coughlin won two Super Bowls, but are the Giants wasting a season in 2015 sticking with the same guys instead of getting the re-build underway sooner than later? This could be the final season in New York for both Coughlin and QB Eli Manning if the Giants don't put together a winning season.

The Panthers won the terrible NFC South with a 7-8-1 record in 2014, but actually looked pretty impressive in the playoffs. They hammered the banged-up Cardinals in the wildcard round, and played the Seahawks tough in Seattle. The Panthers' success will be tied to Cam Newton as long as he's behind center in Carolina. Since he's been in the league, Newton's rushing numbers go down a little every year, and his passing numbers stay roughly the same. Will this be the year he finally makes a leap?

The Eagles dominated the Cowboys on Thanksgiving a year ago, but the Cowboys took it to Mark Sanchez and the Eagles the second time around.

In a rematch of the Super Bowl that took place in "Ace Ventura: Pet Detective," Bill Lazor and the Dolphins will travel up to Philadelphia this time, where Ace will once again fight Swoop on the sidelines.

You don't get to pick first overall in the NFL Draft unless you were a terrible team the year before, and that is exactly what the Buccaneers were. The Bucs stunk on offense a year ago (25th passing, 29th rushing), and they'll likely stink on offense again in 2015, but with a shiny new QB. The Bucs are widely thought to be drafting Jameis Winston with the #1 overall pick, although they could certainly pull off a surprise and either draft Marcus Mariota or trade the pick. Whatever they do, it's probably going to be a few years before Tampa is competitive again.

First of all, thank you NFL schedule makers for making me spend my Thanksgiving in Detroit this year. That's just terrific.

It's no secret that the Eagles are going to try to run the ball a ton in 2015, which makes the Lions an interesting matchup. In 2014, the Lions were the #1 defense against the run, both overall and in yards per carry. Over the last 10 years, they had the fifth best yards per carry allowed in the NFL at just 3.2. Like the Eagles, the Lions experienced some roster turnover this season. Ndamukong Suh is out. Haloti Ngata is in.

Offensively, Detroit has the best wide receiver in the game in Calvin Johnson, and very talented quarterback in Matthew Stafford. Will the Lions defense be as good as it was a year ago, and can their offense reach its max potential? If so, this is one of the more talented teams in the NFC.

How depressing is that?

In each of the last two training camps, the Eagles held joint practices with the Pats, so the Philadelphia media contingent has gotten a chance to see them up close and personal. They're impressive, obviously, and cheaters or not, this is the most successful team in the NFL over the last 15 years.

The Patriots are a nightmare in Foxboro. Over the last two seasons, including the playoffs, the Pats are 18-1 at home, with the one loss being a meaningless Week 17 game in 2014 in which Bill Belichick rested a number of his starters. When fans look at the schedule and start figuring out how many games the Eagles will win this season, just about all of them, including the most delusional and/or optimistic ones, will pencil in a loss.

I had originally thought the NFL would have the Eagles play in New England Week 1, but the Steelers will be the sacrificial lambs to be slaughtered by Brady and the Pats instead.

Hmmmmm... What could be the big appeal to this game? Oh that's right! The Eagles traded LeSean McCoy to the Bills for Kiko Alonso. I wonder if Shady will be fired up to face his star-hating ex-coach in this one.

The Cardinals went 11-5 last year despite a laundry list of injuries, and then they got pummeled in the playoffs by a seven-win team. Hats off to the Cards for winning so many games, but do they really do anything all that well?

Arizona feels like a team that could fall back to Earth a bit in 2015. The Cardinals have appeared on the Eagles' schedule each of the last four years, with the Cards winning three of those games. Maybe this year the Eagles can try covering Larry Fitzgerald, who has torched the Eagles for 47 catches, 802 yards and 11 TDs in seven career games against Philly.

The Redskins bounced the Eagles from the playoffs in Landover Week 16 last year. The Skins were awful in 2014, but seemed to get up to play Philly.

Could this game be for the NFC East division championship? This will be the fourth consecutive year the Eagles close their season on the road.

The Eagles have extremely minimal travel distances to their road opponents in 2015: